About:
The Drought by Steven Scafardi is a novel which follows an unfortunate man trying to get laid. The title refers to the period the protagonist goes through between having sex. The book is being marketed as a genre called “lad lit” which, to me, seems appropriate. 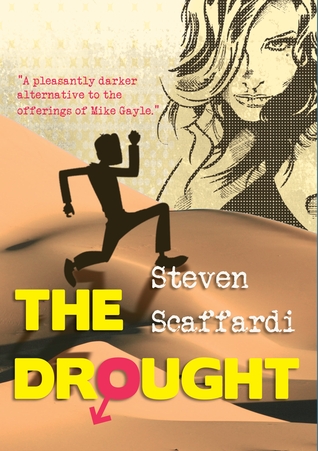 My rating for The Drought – 4

Buy this book in electronic format*

Thoughts:
The Drought by Steven Scafardi (website | Facebook @SteveScaffardi) is a funny book which takes place in England. The narrative flows smoothly and, while the situations are somewhat predictable, they are still funny and clever.

I really enjoyed the humor in this book, it was sometimes raunchy, but mostly sarcastic and worked as the guys kept on busting one another. There is a bunch of English slang in the book, which was fine and helped the narrative feel authentic. There were sports references galore and lude, crude men talk.

While this book is funny, it is also a bit sad and cynical because…hold on to your hats… it mostly rings true. Granted, we don’t all get into a humiliating situation every date, guys do stupid things in order to impress women (it’s in our genes) and we constantly think about sex (mostly during a “drought”).
And no, we didn’t learn a damn thing in the process.

But don’t worry Dan, as everyone knows after a Drought… there is a flood.

Synopsis:
Dan Hilles broke up with Stacey, his long time girlfriend. Dan has been out of the dating game for so long he has no idea on how to proceed, talk to girls or even behave as a single man.

But Dan has his friends, Ollie, Jack and Rob who are there to help and also trip him for their own amusement. After all, what are friends for?

Zohar – Man of la Book
Dis­claimer: I got this book for free from Shirley You Jest! Book Awards.
*Ama­zon links point to an affil­i­ate account