About:
The Cowboy President: The Making of Teddy Roosevelt and the Making of the American West by Michael F. Blake is a non-fiction book detailing adventures and misadventures of a New York City “dude” in the Western South Dakota Territory. 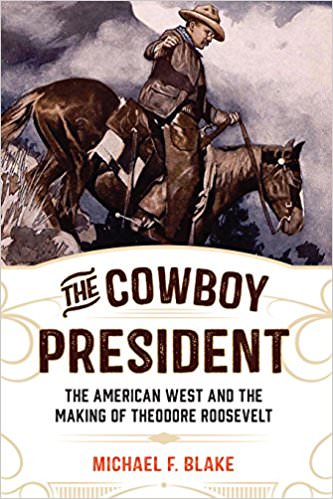 Thoughts:
Teddy Roosevelt is an admirable figure. A man who truly believed that it’s never wrong to do the right thing, even if it hurt him or his friends. In The Cowboy President: The Making of Teddy Roosevelt and the Making of the American West author Michael F. Blake tries to establish how a rich boy from New York City became a man of such morals.

Roosevelt was enamored with the life of a rancher, he enjoyed the tough life, the days out in the extreme hot, or extreme cold and the strenuous existence. Unlike many other tourists, he didn’t simply pack up his hunting trophies and headed home to his gilded castle to brag about the harshness at dinner parties. Instead he gave up almost everything to go and be a cattle rancher.

As a rancher Roosevelt had to prove himself over and over again, to his family, employees, town folk, and fellow ranchers. The code of honor, and sometimes dishonor, these people lived with had a tremendous impact on his life and how he conducted himself and his business from then on.

The author states that this part of Roosevelt’s life is often glossed over by biographers and historians, they don’t see it as very important. As well all know, however, it is the small moments, the unassuming ones which catch us off guard that sometimes create the deepest impact. It is the people who we meet on the road that cause us to change direction and see the world in a new light, as well as appreciate their way of living showing us that there are no right or wrong ways – just different.
A lesson America seemed to forget.

This min-biography is detailed, but also tells a story. The people in it come to life and many had an impact on Mr. Roosevelt for his whole life.