The Cotillion Brigade: A Novel of the Civil War and the Most Famous Female Militia in American History by Glen Carney tells the story of the Nancy Hart Rifles from Georgia, Confederate and pro-slavery sympathizers, and Oscar Hugh La Grange, and colonel in the Union Army. Mr. Carney is a published author and journalist. 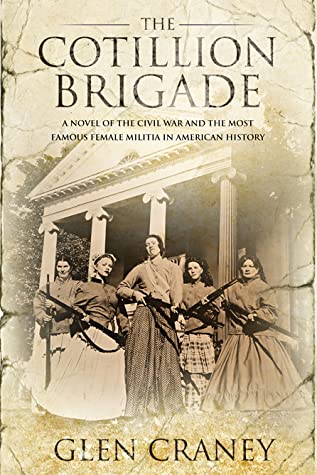 I have read The Yanks Are Starving: A Novel of the Bonus Army by Mr. Carney previously, and enjoyed it very much. To be sure, I was already half sold when the opportunity came up to read The Cotillion Brigade: A Novel of the Civil War and the Most Famous Female Militia in American History.

I enjoyed this novel a lot more than I thought I would, which is always a nice surprised. The author goes to great lengths to build a coherent picture of life during that period, antebellum society, and soldering.

Glen Carney does not mince words when it comes the views of the Southern Confederate sympathizers about slavery. He does not sugarcoat their views, nor tries to justify them by today’s standards.

By the same token, the Nancy Hart Rifles and their motivation come through clear as daylight. He ladies were afraid of rumors, innuendos, and news of Union soldiers burning towns, and raping women. With the men away fighting to keep other humans enslaved, they took it upon themselves to protect the town, and their honor.

On the other hand, we get the story of Hugh LaGrange, the name ironically coincides with LaGrange, GA where the Nancy Hart Rifles reside. LaGrange, an abolitionist, joined the Union Army and worked his way to Colonel, eventually rising to the rank of brigadier general.

In this instance, Mr. Carney builds a narrative around how difficult soidiering was, and the Abolitionist cause. Col. LaGrange, commanding the Army of the Cumberland took part in many battles, and was even taken as a prisoner of war. After the Battle of West Point (in Georgia), he encountered the Nancy Harts.
During his time in the state, Col LaGrange also discovered his fondness of Georgia women, as his later marriages seem to suggest.

I was fascinated by the descriptions of the army at the time, the decisions made by LaGrange, his capabilities, and attitude. I understand that much of these narratives are fictional, but I found them gripping nonetheless.

This is a well written, well researched book about the American Civil War. I have not heard of the Nancy Harts Rifles before, and only read a bit about Col. LaGrange. If you enjoy reading stories which are often overlooked in a large historical narrative, this book will certainly fit the bill. The end of the book has some information, pictures included, of the historical characters mentioned in the story – which I found to be a wonderful addition.

Nancy “Nannie” Colquitt Hill is a strong-minded young woman, living on a plantation in LaGrange, Georgia, awaiting her future in the antebellum society. The American Civil War, however, has halted her plans and Nancy forms a women’s militia to prepare for battle in case the Union attacks their small town.

Oscar Hugh LaGrange, preferred to be called by his middle name, from Wisconsin joins the Abolitionist cause, focusing on making sure that the new territory of Kansas joins the Union as a free state. Several years later, Hugh, now a Union Colonel, is a hardened soldier dueling Confederate generals Joseph Wheeler and Nathan Bedford Forrest across Tennessee and Alabama.

Summary
Reviewer
Man of la Book
Review Date
2021-03-15
Reviewed Item
The Cotillion Brigade: A Novel of the Civil War and the Most Famous Female Militia in American History by Glen Carney
Author Rating
5

The Cotillion Brigade: A Novel of the Civil War and the Most Famous Female Militia in American History by Glen Carney