The Caves of San Pietro by Susan Gayle is a historical fiction story set in Italy during World War II. Ms. Gayle a charter member of the New Orleans WWWII museum, and a physician. This is her first novel. 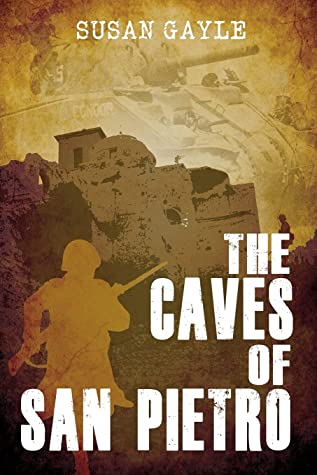 I was pleasantly surprised by this historical fiction of World War II. I have not read much about the war in Italy, but The Caves of San Pietro by Susan Gayle certainly piqued my interest.

The author, who is a relative of the protagonists, created a vivid picture of life during the war, in Italy particularly. The experiences of both American soldiers and Italian citizens is indeed well researched and extremely well told.

Surprisingly, my favorite part of the book was the bike ride Frank and his brother took from Texas to New York City and back. Along the way they met especially fascinating people, got autographs of notables, and won a sizeable bet.

I do love road trips, and seeing the “real” America is second only to unquestionably meeting fascinating people. The author did a remarkable job recreating the journey, in all its awesomeness and hardships.

The Battle of San Pietro Infine was specifically fought in December of 1943. Allied forced attacked heavily fortified German positions around the town. The victory, nevertheless, was crucial to give allied forces a way to liberate Rome. Evidently, it was also the first battle where troops of the Royal Italian Army fought with the Allies.

I have not done much reading about the war in Italy. I can think of five, or so, books that deal especially with the subject. Generally, they all made fascinating reads and I’ll make sure to be on the lookout for more.

Do not skip the author’s notes at the end of the novel, along with the pictures. Ms. Gayle tells of her research, history, and the relatives which inspired this novel.

Frank Moster, a soldier from Texas, survives the landing on the beaches of Salerno.  Born in New York City to an Italian family, Frank was relocated to Texas on the famous Orphan Train.

In Salerno, Frank gets involved with an Italian family and helps them survive the war. Unfortunately, all of their lives will be changed during the Battle of San Pietro.

Buy The Caves of San Pietro from Amazon.com*
More Books by Susan Gayle*

The Caves of San Pietro by Susan Gayle