The Candy Bombers: The Untold Story of the Berlin Airlift and America’s Finest Hour by Andrei Cherny  is a non-fiction account of one of America’s greatest and successful humanitarian missions. Mr. Cherny is an author, lawyer, and businessman. 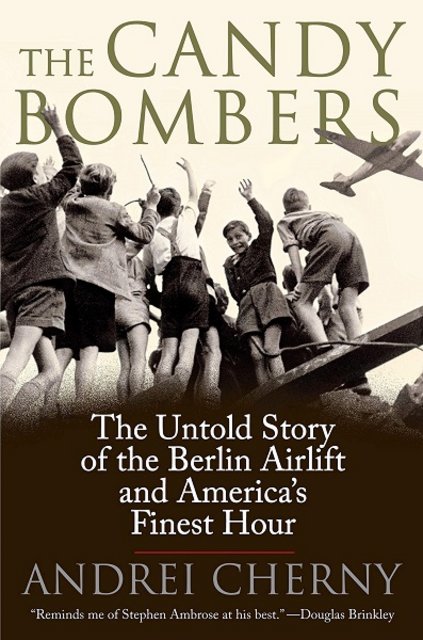 The Berlin Airlift is a defining moment of the Cold War, the operation showed the people of Berlin, looked upon as enemies of America that we stand behind them. The Candy Bombers: The Untold Story of the Berlin Airlift and America’s Finest Hour by Andrei Cherny shows how the official airlift, as well as the unofficial act of dropping candy bars, shifted the views of Berliners to prefer democracy over communism.

The airlift was instrumental because if showed the Germans that Americans do care about them, and that the US used all its might to help instead of destroy. Dropping candy is, in my opinion, what makes American great, a humanitarian operation done purely for altruistic reasons.

I have heard of the Berlin Airlift, but never realized all the moving pieces around it. I’m not talking about the military logistics per say, but all the events and persons which were involved. The airlift happened in the middle of a presidential election, while the Soviets were trying, forcefully, to show the superiority of their economic system, while America prevailed through showing they simply cared.

The true power of the story comes through the quirks of history, which only can be told with hindsight of decades in the rear-view mirror. If events did not fell in place as they did, if people, who held firmly to their beliefs, did not step up to the challenge, history would look a lot different, and maybe the “Cold War”, would have become an armed conflict.

Even though the goal of the book is academic (I believe), the author tries to write a narrative which is interesting, informative, accurate, and moving. The research is comprehensive, but the story doesn’t get lost in the details.

Even though this is a very lengthy book, I was glad to have read it. As always, I like the behind the scenes look which takes places in the offices of power, and it always amazes me how decisions were made and how thing could have easily gone wrong. More than that though, the book made me appreciate how little act of kindness can grow to change attitudes and nations for decades.

The book follows, mostly, four people: Harry Truman, Lucius Clay, Bill Tunner, and Hal Halvorsen. Through their eyes the author attempts to tell a complete story of the Berlin Airlift.

Harry S Truman, the 33rd President of the United States, knows there must be a response for the Soviet forces blocking all roads and rail travel to West Berlin. But Mr. Truman also has to be careful not to start World War III.

General Lucius Clay of the US Army, a frustrated soldier who is doing his duty even though he never got his choice assignment. General Clay actually started the Berlin Airlift as an act of defiance against the Soviets before getting permission from President Truman to proceed.

Air Force General William H. “Bill” Tunner was an expert in large-scale military airlift operations. A workaholic who thrived on statistics and order, General Tunner was the perfect man to orchestrate the precision needed for such an operation.

Colonel Gail Seymour “Hal” Halvorsen is the pilot that started, unofficially, to drop candy from his bomber to the children of Berlin. Mr. Halvorsen thought he would be court martiaed if found out, to his surprise the strict General Tunner not only approved, but made him the face of the airlift.

The Candy Bombers: The Untold Story of the Berlin Airlift and America’s Finest Hour by Andrei Cherny