The Boys from Biloxi by John Grisham is a thriller set in Mississippi, a saga of two Croatian immigrant families who find themselves on the opposite side of the law. Mr. Grisham is a best-selling author whose books have been translated all around the world. 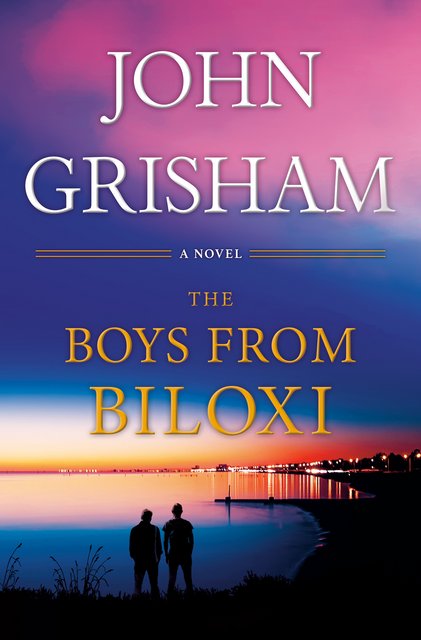 I have always enjoyed Mr. Grisham’s books and jumped at the chance to read his latest. The premise sounded enticing; a legal/mafia thriller set in Biloxi.

The reader is “listening” to an omnipotent narrator without unfortunately, without the characters evolving much. My copy started with two glaring historical errors which almost made me put the book down, this is not the Grisham books I’ve known. However, I figured since it was a galley it might have been caught, but from reading other online reviews I guess they weren’t. To be honest, if I didn’t know that John Grisham wrote The Boys from Biloxi, I certainly wouldn’t have guessed.

Even though the story is somewhat repetitive, it is still very well done, despite the appearance that an editor’s hand never touched many parts. Even though I didn’t care much for the characters, they are certainly interesting and unforgettable.

As in many other Grisham books, there are sports scenes, and, of course, courtroom dramas that would last a lifetime to any one person. I found the frank discussions about legal morality, responsibility, as well as the death penalty in the context of the novel to be fascinating.

Even though the setup seemed too long, the courtroom ending brought the book up a notch. As previously mentioned, this was a strange novel, not very “Grisham-like”, but enjoyable nonetheless.

Keith Rudy and Hugh Malco grew up ion Biloxi together, played on the same teams, and rooted for each other. The Malco family has become part of the Dixie Mafia, dabbling in alcohol, gambling, and prostitution. The Rudy family turned to the less lucrative occupation of honest living.

The two childhood friends find themselves on opposite sides of the courtroom, in a showdown that will live its mark on Biloxi for generations to come.

Buy The Boys from Biloxi from Amazon.com*
More books by John Grisham*

The Boys from Biloxi by John Grisham