The Books of Jacob by Olga Tokarczuk (translated by Jennifer Croft) is a historical fiction novel, following an 18th-century Jewish man who convinces many Jews that he is the Messiah. This book won the Nobel Prize in Literature. 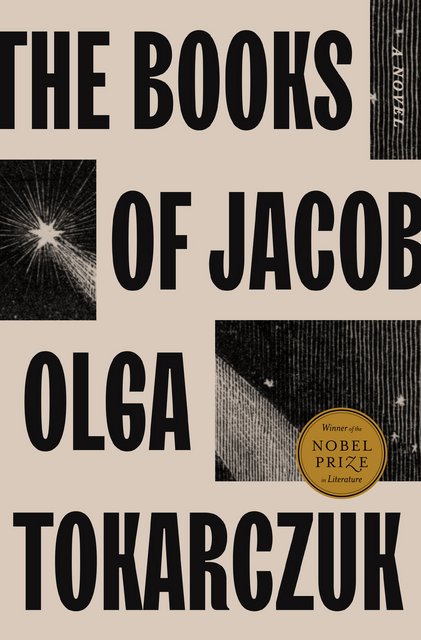 I knew I was in for a treat when I opened up the book and noticed the page numbers start from the end. Right off the bat, this was something special. I have to admit that this book has taken me much longer to read than anticipated. It is complex, literary, multi-lingual, and has many Jewish and Christian philosophies entrenched. Some pages took me several tries to decode or understand, others were a breeze. I did, however, notice almost immediately that each page takes me about twice as long to read as other books.

Nevertheless, The Books of Jacob: or a Fantastic Journey Across Seven Borders, Five Languages, And Three Major Religions, Not Counting the Minor Sects. Told by the Dead, Supplemented by the Author, Drawing from a Range of Books, and Aided by Imagination. The Which Being the Greatest Natural Gift of Any Person that the Wise Might Have it for a Record. That My Compatriots Reflect. Laypersons Gain Some Understanding, and Melancholy Souls Obtain Some Slight Enjoyment by Olga Tokarczuk is a superb masterpiece. In my humble, layperson’s opinion, the book is in the same class as Tolstoy’s War and Peace.

The book manages to recreate the image of Jacob Frank and his followers, instead of the prevalent “false Messiah” narrative, the author tells a religious/cult mentality which is much more enjoyable. Ms.  Tokarczuk presents authentic ideas, honest beliefs, and close personal relationships. But also outlandish scams of an outstanding charlatan, and all the makings of a cult including sex, money, and a court.

The story is told within a historical, and geographical context. Geography is a major part of telling the story, as the concentration of Jews at the time in the Polish/Ukraine area was probably the biggest there. The author shows how Frank’s followers influenced notables over decades, including the French Revolution, as well as American courts. The political aspect, and influences of the Ottoman and European Empires, are also incorporated into the story and give it a richer context. Most of the story is told through the people surrounding Jacob Frank, believers, non-believers, and charlatans alike. A Jewish woman who is dying for decades is used as an omnipotent narrator to connect events, it is a masterful stroke.

As I mentioned, this is certainly a slow read. If I wasn’t able to speak Hebrew and be familiar with a bit of Polish, and German, and have large familiarity with Jewish and Christian history, dogma, and ceremony it would have taken me longer to read. I still needed to search for something every other page, and I am fully in awe of Jennifer Croft who managed to translate it so well. The book is also full of many difficult-to-say Polish names of towns and people, not to mention Hebrew and Latin. Many of the characters have similar names, but after several hundred pages I just decided to go along for the ride.

The book attempts to reflect reality through the eyes of those who are living it. Especially fascinating for me was the telling of the blood libel occurrence of 1752. The historical aspect is fascinating, and the characters, historical or not, give events context and humanity to this superb book.

Jacob Frank has been a divisive figure during his life and after his death. He modeled himself as the successor to Sabbatai Tzvi, a Jewish mystic who claimed to be the Messiah about a century previously.

Like every other good Jewish boy, Jacob Frank also claims to be the Messiah. He had thousands of Jews follow him, and his court through decades of turmoil.

The Books of Jacob by Olga Tokarczuk