About:
The Bat by Jo Nesbø is the first novel in the Harry Hole series. The series has been translated to several languages and even being made into a movie. 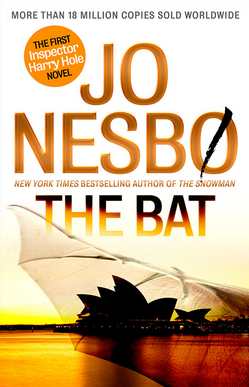 Thoughts:
The Bat by Jo Nesbø is not the first  Harry Hole book I have read, I was on a book tour for The Devil’s Star and that’s when I discovered Harry Hole. The nice thing about  this series that, while you follow the characters, they novels are more or less standalone. Reading the other novels will give you more insight and more enjoyment, but they are not a must.

This is an enjoyable novel, I found it peculiar that the author chose to set the novel in Australia, simply because it is the first novel in a series about a Norwegian detective, but it works. The “fish out of water” storyline seems particularly interesting in this case.

Mr. Nesbø’s characters and descriptions are nicely written (great job by translator Don Bartlett) and the Norse attitude jumps off the pages. The novel’s mystery is solved about two thirds into the book and the rest of the story tells of Hole’s race to capture the villain before his visa runs out and/or he self destructs completely.

Like many other novels, this book involves a man in his mid-life crisis who is on a narrow path to straighten out but weaves in and out of self destruction due to mid-life crisis. The novel has a lot going for it, a mystery, stranger in a strange land and psychological elements to keep the reader engaged.

Synopsis:
Oslo Crime Squad Inspector Harry Hole is sent to Sydney, Australia to represent Norway in an investigation of a Norwegian national’s murder. Harry makes friends with the local police officers and leaves his official role as an observer on the sidelines to take a more active role on the case.