About:
The Atlantis Gene  by A. G. Riddle is the first book in The Origin Mystery series, following an autism researchers that identified a gene which could be the salvation of the human race, about to be extinct. This was Mr. Riddle’s debut novel after working as an IT entrepreneur. 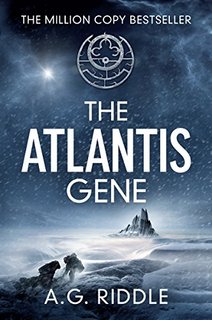 Thoughts:
The Atlantis Gene (The Origin Mystery #1) by A. G. Riddle is a fast thriller, which stops here and there to explain historical occurrences and scientific theories. It’s a fast story, which could be confusing do to the quick timeline and point of view changes.

I specifically enjoyed the author’s weaving of scientific and geological occurrences, like the Genetic Bottleneck theory and The Youngest Toba eruption which had nearly wiped out all humanity 70,000 years ago. I actually had to go and do my own research because the theory was so far-fetched.

The characters in the book have some growth to do, but this is a series of six books, I can only assume that Mr. Riddle chose to err on the side of explaining the theories and building his story. Whether or not he chose correctly is up to the individual, I would have been disappointed if I didn’t know that other books exist. Strangely, the only fleshed out character is the one who wrote a diary.

At first I thought the character of David Vale was completely wrong, he does not talk, or think, like any soldier I know. That being said, about half way through when the author weaves through scientific and genetic theories it hit me, David is there for us, the readers, since everyone else in the story are already familiar those concepts, and this is the way the author chose to explain it. I perfectly agree with method, if that is what the author went for, because otherwise it could easily be perceived that he is talking down to the reader.

There are several things which I found confusing or simply ones which made no sense, especially when it comes to travel and actions in the arctic. It didn’t ruin the story for me, but I think that the author could have done a better job at it without damaging the narrative.

I did enjoy the story and the science behind it, but I did think that when it came to action and cliff hangers (literally and figuratively) the author took liberties which he might be able to get away with in a movie, but no so much in a book.

Synopsis:
Kate Warner, a geneticist in Jakarta working with autistic children, discovers a treatment which could revolutionize the world, and rethink human’s genetic history. David Vale, an agent realizes that his agency is compromised but has no idea why and how deep the conspiracy is.

The Immari, a group which represents itself as humanities last saviors due to a virus which is devastating the species at an incredible rate, or the ones which compromised David’s agency. David is on the run, receiving a message which leads him to Dr. Warner and the Atlantic Gene. Dr. Warner, however, doesn’t realize that she is the one half the world is after.

Buy The Atlantis Gene  from Amazon.com*
More Books by A. G. Riddle*