About:
The Art of the Political Putdown: The Greatest Comebacks, Ripostes, and Retorts in History by Chris Lamb & Will Moredock collects many verbal banter of famous politicians over the last two hundred years or so. Mr. Lamb is an author, historian, columnist, and satirist working as professor of journalism at Indiana University–Purdue University at Indianapolis. Mr. Moredock is a published author and freelance writer. 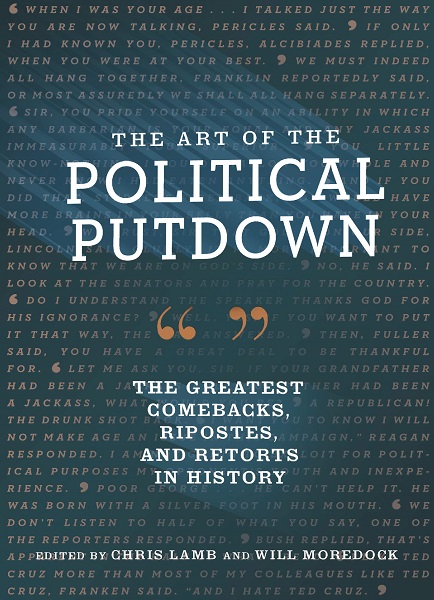 Thoughts:
I was always jealous at people who can quickly think on their feet and come up with a noteworthy retort to an insult, or a verbal sting. Some of the best were, of course, politicians whose oratory skills were far beyond those of other men and women. In The Art of the Political Putdown: The Greatest Comebacks, Ripostes, and Retorts in History by Chris Lamb & Will Moredock those sayings are collected into a gem of a book which is both funny and amusing.

The quality of the sayings vary, some are witty, some are just OK, and others really shouldn’t have made it into the book. Most of these gems are well known, but I think the authors would have done well if they were more discreet, anyone can say a comeback, but there is an art in doing it like Churchill or Lincoln. Unfortunately many of today’s politicians that are quoted in this book are not anymore witty than the average middle school student, and some are less.
They simply have no place in this book.

There is some repetition in this book, I got an advanced reader’s e-copy which was not formatted as well as it could have been, so I don’t know if it’s final copy, out of order copy, or was I reading a passage which simply seemed to me as part of the book.

The book mostly concentrates on politicians from English speaking countries. This is understandable as it is difficult to translate simple stories, and quite impossible to translate putdowns and puns. The authors do include several passages from ancient times, including those made by Cicero, Julius Caesar, Alexander the Great, and even King Henry VIII.

I don’t understand, however, to put in the putdowns from today’s political climate. Those comebacks and put downs are juvenile, as I said before, not witty and are meant to provide a bullet point for the never-ending news cycle, and sadly, “owning” the other side to the cheers of the uninformed masses.

The authors did a great job putting the passages in context, these are little stories and not a bunch of quotes out of context. This, for me, was the strength of the book and made it more enjoyable than other books of quotes.

This is an enjoyable, quick read which lets one appreciate the power and art of a good retort. It’s a fun read for any history lover, or just those who love a quick and witty reply told with a healthy sense of humor and context.