The Arms Maker of Berlin by Dan Fesperman is a novel taking place in present time, as well as during World War II in Nazi Germany’s Berlin. The book mixes espionage and suspense while telling parallel stories. 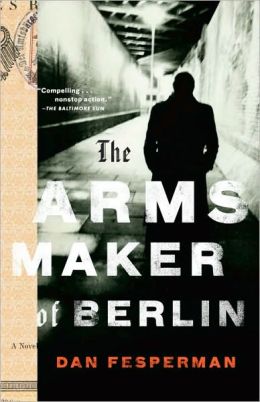 The Arms Maker of Berlin by Dan Fesperman is a very intriguing historical fiction novel about a history professor named Nat Turnbull. The story begins with the professor being abducted from his office by the FBI who wants him to recover missing OSS documents from World War II concerning his mentor. The documents have to do with a resistance cell in Berlin called the White Rose and an industrialist millionaire who would like those files to disappear.

The plot takes place in current time, as well as Nazi Berlin, alternating effortlessly between chapters, but most of the adventures take place when Nat and a German researcher named Berta, try to uncover the mystery and are sent on a goose chase by Nat’s mentor while avoiding everyone from the FBI to the Iranians.

I thought this book was engrossing, exciting, well paced and surprising (I did not foresee the ending) as Nat said to his students at the end “I hope to show you the ways in which history is a living entity“.

Zohar – Man of La Book
Dis­claimer: I borrowed this book from my local library.
*Ama­zon links point to an affil­i­ate account

The Arms Maker of Berlin by Dan Fesperman