The Appetite Factory by Jon Gingerich follows a Madison Ave., crisis management specialist living in a post-truth world. Mr. Gingerich is a fiction instructor in the Gotham Writer’s Workshop, and a published author. This is his debut novel. 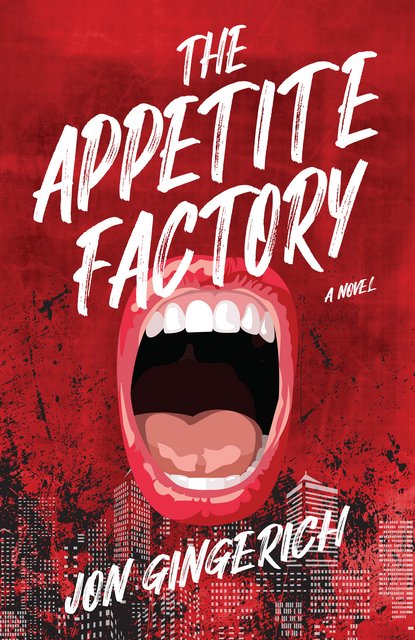 The synopsis of The Appetite Factory by Jon Gingerich sounded very interesting. I’ve been reading a lot about the past several years on disinformation, even though I was more concerned about state-sponsored lies. Those books have really opened my eyes and made me aware of the huge number of falsehoods we’re exposed to every day.

I have also noticed that the “default mode” for both business and politics (no matter your alliance) is lying. Sadly, people don’t even make an effort to hide their lies anymore. I see American politicians going on nationwide news programs spouting Russian propaganda, laughable statistics, or simply trolling like teenagers.
Worst of all, the words “shame” and “embarrassment” have left our political and business lexicon.

Leonard Lundell, the protagonist, resides in an ugly world, working an ugly job, living an ugly life. Everyone around him is either fat (usually), ugly, old, lazy, or an idiot. And usually a combination of those qualities.
He’s also a cynical sonofabitch, just like me.
Unlike me, however, Leonard is just a bad person thriving in an absurd society which values clicks over content, and online life over reality.

I enjoyed this “post-truth” novel very much, it is well written with an interesting premise. The author certainly has experience in the PR department, and it shows.

The story took a bit longer to get going, however. It was about two-thirds of the way through when Leonard opened up the Appetite Factory. About halfway through we got a glimpse into Leonard’s past, which was an interesting window into the world of telemarketing.

This brings me to something I have been thinking for decades about:

I have the advantage of traveling far and wide and living in other countries. The acceptance of scam culture in the United States, a country that prides itself on integrity, never ceases to amaze me.

Not only do we accept it, but we honor and embrace this culture. Whether it would be business, politics, or celebrities we put our blinders on and accept being duped, even though we know we are being scammed, as part of “doing business”.

From telemarketers who knowingly lie to you on the phone, to used car salesmen who lie to your face, everything is legitimate as long as they get to separate you from your money. This is not new, it has been done for centuries, it’s the boldness of it that’s troubling.

Once I started working with marketing departments, either as a grunt developer, or executive. I got an education that opened my eyes in many aspects. One of them was my pet peeve: fees.

I hate fees with a passion.

The marketing folks I worked with loved fees.
Why?
Because it raises profits, customers just accept it, and there is no serious downside.
Unless that is if we all call and complain.
Which we, as a society, don’t.

If companies want to raise the price, do it up front, don’t charge me on the back-end. The day I realized that fees are here to stay was when I conversed with a younger co-worker (who is now in his late 30s).
His answer: “how are they supposed to make money?”

Selling a good product for a fair price never even registered on his radar.

As a matter of fact, social media has turned us all into scammers!

We might not like it, but it’s true. And, like everything, it varies by degrees. Indeed, you don’t have to be a fake diamond handler or a German heiress. We all put up “fake lives”, whether it’s a vacation we can barely afford (or not at all) or use filters to make ourselves look much better than we otherwise would.

In her excellent book, The Age of Surveillance Capitalism, professor Shoshana Zuboff says that even though tech companies promise to connect us to the world, they essentially collect raw materials from users to create their products (targeted ads).

We are living in the scam age.

Some of the most absurd, and to many obvious, fake news published are carefully crafted to look as the truth. As mentioned above, using filters, we essentially indulge in “fake news” about ourselves almost daily.

Along with fake users, and fake followers, the social media age has normalized fakeness. Unfortunately, this is happening at a time when authenticity should be one of our most prized possession.

Leonard Lundell is a low-level executive, working for a Madison Ave. public relations firm. He spends his days going from one crisis to another, most of them self-inflicted by his clients.

Leonard has his own personal crisis as well. His mother is a hoarder in ill health, and he has a strange condition in which he doesn’t taste food, but loves to eat cleaning products.

Leonard meets Patty, who discovers his strange culinary habits and blackmails him to make her the city’s best restaurants which can’t satisfy her insatiable appetite. While going through his crisis, Leonard (or Patty) comes up with the brilliant idea of faking crisis for brand awareness.

The Appetite Factory by Jon Gingerich