Article first published as Book Review: Superman: The High-Flying History of America’s Most Enduring Hero by Larry Tye on Blogcritics.

“Elemental power – a simple grandeur of conception – that sticks in the soul and finds its way to the corner of one’s smile.”
Superman at Fifty! The Persistence of a Legend!

Superman: The High-Flying History of America’s Most Enduring Hero by Larry Tye is the story of the history behind the world’s most beloved and enduring hero. Initially created as a villain in 1933, later revised as a hero by Jerry Siegel and drawn to resemble movies star Douglas Fairbanks Sr. by Joe Shuster  (Clark Kent was molded after Harold Lloyd) . 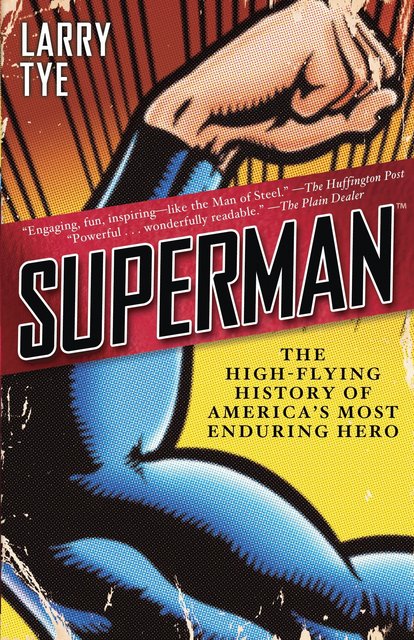 My Rating for Superman:The High-Flying History of America’s Most Enduring Hero – 5
Buy this Book in paper or elec­tronic copy*
More Books by Larry Tye

I have always liked Superman.

I still remember when my mom took me, an eight year old, to the big city to see Superman: The Motion Picture starring Christopher Reeve. It was a big outing, not only the city… but a movie!!!!

I read everything I could about the movie beforehand, kept every article, studied every picture and learned the bios of the stars and crew. Heck, I knew what the movie was about before I even entered the theatre.
But you know what?
For those two magical hours I truly believed a man could fly.
And Christopher Reeve will always be “my” Superman. 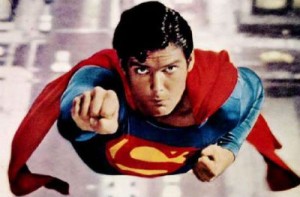 Especially then Superman has always held a magical hold over me. I have a huge Superman collection which I love and my wife abhors. Lately the collection had to suffer due to kids, rent, food, etc. but at least it’s easy to buy me presents. My son, who at the age of three and despite a constant brain washing from his old man, decided to follow Batman (probably just for spite) have an ongoing battle with me about who is the “greatest superhero”.
I’d like to think I’m winning but really, is there such a thing as winning an argument with a five year old?

I got this book from the local library, when I took my kids there a few weeks ago my son spotted it on the “New Books” shelf, grabbed and proudly presented it to me.
You know I had to check it out.

Superman – the granddaddy of all superheroes, the one who started it all, the icon who is held to higher standard in fiction and has set the standards for many of us in the non-fiction world. It’s no wonder why the franchise is almost 80 years strong and growing stronger.

The research in Superman: The High-Flying History of America’s Most Enduring Hero by Larry Tye (website | Facebook | @LarryTye) is excellent and the book itself is fascinating. Mr. Tye goes through the early developmental stages of Superman by Jerry Siegel and Joe Shuster , through the character’s success and their mismanagement of their careers, the shysters, the businessmen and the fanboys who grew up to reclaim their hero and his “parents”. The story continues through the years, telling of important story arcs as well as individuals who shaped the mythology, writers, artists, actors and publishers. 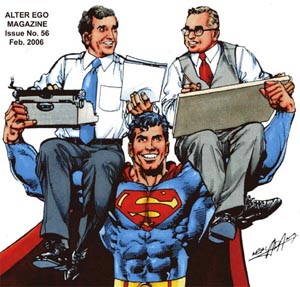 Along the way the author slowly reaches to the conclusion that Superman is not just an American hero, but a hero the children around the world and an icon to look up to. Especially poignant to me was the time after the death of Superman where, in the comics, heroes rose and ordinary people wore the famous emblem trying to live up to ideal of Superman himself.

The book is a well researched document about a beloved character and the people who made him so. The narrative is full of wonderful anecdotes about the comics (including why many characters have double L in their names), the famous copyright trials, the movies, TV shows (including Smallville) and choke full of interviews with a cast of characters who deeply care about this mythological titan.

Buy this Book in paper or elec­tronic copy*

Zohar – Man of la Book
Disclaimer: I got this book from the local library
*Ama­zon links point to an affil­i­ate account
BOOK BLOGGERS – Have you read Superman: The High-Flying History of America’s Most Enduring Hero? If so link up your review below: