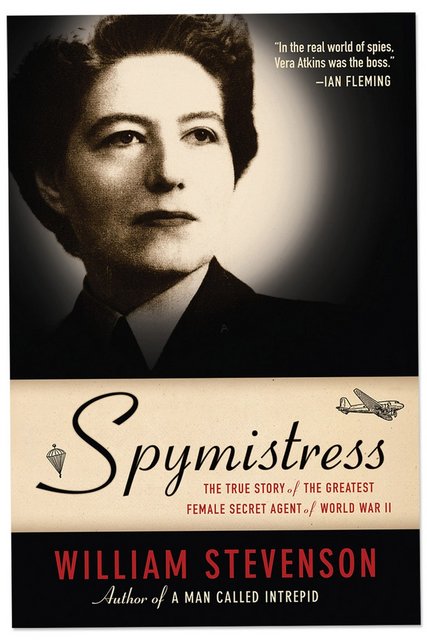 The more I read about the response to the plight of the Jewish people during World War II, the more I’m amazed that any survived. From the conference in Évian, where the participants condemned them to a prolonged death at the hands of the Nazis, to the refusal to allow immigrants. If it wasn’t for a small group of people (relatively speaking), history would look a lot different.

One of those people was Vera Maria Rosenberg, known as Vera Atkins because a Romanian Jew, born in Bucharest, would not be accepted. Unfortunately, Ms. Rosenberg was overshadowed for decades, despite her brilliant contributions to the war effort.

Spymistress: The True Story of the Greatest Female Secret Agent of World War II by William Stevenson attempts to correct that mistake.  The book also sheds light on many secrets which were locked away for decades. Stalin refusal to help allies in Poland, Germany sinking British ships because the Russians were using a known broken code, the Vichy government murdering thousands of jews after Normandy, as well as the allies refusing to destroy the concentration camps, despite solid proof and ability to do so. According to the author, this is because many powerful people were either pro-Nazi, antisemitic, or working for Stalin.

Vera Atkins was not only brilliant, but effective as well. She fought in the Special Operations Executive (SOE), answering to Churchill obviously at great peril. Author Ian Fleming even based Ms. Moneypenny, from James Bond fame, on Ms. Atkins. There’s even a mention of Virginal Hall, the famous American spy.

While this book is a bit difficult to get into, the story is amazing and certainly needed to be told. The extraordinary amount of vital information in this book makes it a must read for any World War II buff.