About:
Spy Schools: How the CIA, FBI, and Foreign Intelligence Secretly Exploit America’s Universities by Daniel Golden is a non-fiction book which reveals how academia has become the front-line for spy games among nations. Mr. Golden is a Pulitzer Prize winning journalist. 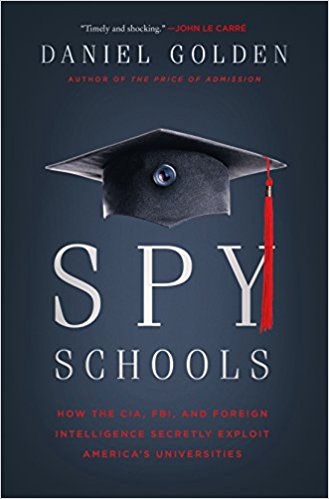 Thoughts:
I am a sucker for good espionage books, ever since I could read I always enjoyed the game of shadows countries play, maybe because I lack the nerves of steel required to participate. When I saw Spy Schools: How the CIA, FBI, and Foreign Intelligence Secretly Exploit America’s Universities by Daniel Golden I knew this book would be right up my alley.

When I saw the author’s name, I looked him up because it sounded familiar and quickly realized that I enjoyed Mr. Golden’s articles previously. The book did not disappoint as it is written in the same factual, crisp, and entertaining manner. Mr. Golden just doesn’t lay out facts and figures, but does his best to tell a coherent story that can be found within those dry statistics.

The author tries to understand why, and how, intelligence services around the world are targeting American higher education, and the implications from those actions. Mr. Cohen takes a few select cases, researches them, and write a comprehensive narrative for the reader.

I could not believe that some schools take federal grants and do not bother to secure the classified work they are doing on the government’s behalf. To me, that is astounding and irresponsible by bot the school and the government. It’s especially egregious since both parties are pretty much aware that spying in academia is actively happening.

The book has several interesting anecdotes, some of which are very compelling. I might disagree with some of the author’s assessments in the book (not that I’m any kind of an expert, just disagrees my world view), but isn’t those exactly the books which we should all read?