About:
Six Days of War: June 1967 and the Making of the Modern Middle East by Michael B. Oren is a non-fiction account on the Six Days war. Mr. Oren is an Israeli historian and politicians who was born in the United States, he served as ambassador to the US 2009-2013. 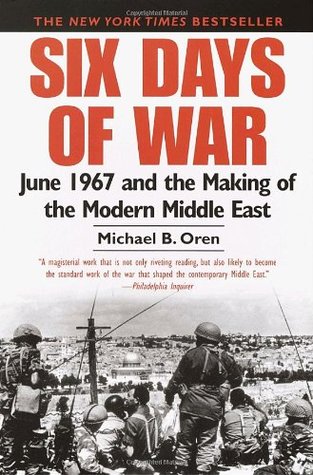 Thoughts:
Six Days of War: June 1967 and the Making of the Modern Middle East by Michael B. Oren is a concise, well-written history book. The war was between Israel and the combined forces of Egypt, Syria and Jordan. At the end of the war Israel survived and doubled its size by occupying the West Bank, Gaza, the Golan Heights and the Sinai Peninsula. An occupation which has ramifications to this day.

Mr. Oren presents the history from the point of view of politicians, not the soldiers on the ground. He doesn’t deal much with military tactics but more with high level decisions and diplomatic chess games. It was amazing to read about the countries which were comfortable far away trying to shape events, while Israelis, Jordanians, Syrians and Egyptians were dying on the ground.

The book, while certainly not perfect, is a fast read and an interesting one as well. I thought the book was objective and well researched, reading it will also bring greater understanding to the current politics in the region.