Silence in the Desert by David Longridge is a historical fiction story taking place around World War II. The novel follows four friends, on opposite sides serving different masters during the war. 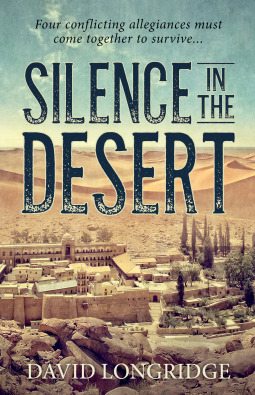 Silence in the Desert by David Longridge has an interesting premise, three school friends join the French Foreign Legion, the The Royal Air Force (RAF) and the Luftwaffe during World War II. Throw into the mix a Jewish German woman who hides as a Catholic nun/nurse for the Nazi army and the story really gets interesting.

It seemed to me the author was more interested in telling history then a story. He “tells” rather than “shows” the story. There is a lot going on, the characters are certainly very interesting and I wish we would have spent more time with them instead of reading about what they’re going through from an omniscient perspective. If this was a fantasy novel, I’d say the author was more concerned about world building than a character driven story.

Every book has its ups and downs, usually around the middle. This book, strangely enough, had ups and downs throughout, which kept me reading but I found to be strange. Overall I’m glad I continued reading to find out what happens to the characters.

Henry, Leo and Bill are acquaintances in the same private school and each of them intends to joining the military and help the war effort after graduation, only on different sides. Henri is commissioned into the French Foreign Legion and soon has to choose whether to fight for Vichy France or Free France. Leo has his eyes on being a pilot in Goering’s new Luftwaffe. Bill, a South African, is heading for the Royal Air Force.

Elizabeth, a German Jew, has to hide her identity with the help of the Church. Her father, a chemical scientist, is out of the country but thanks to her experience and medical training she has become a nurse for the Nazi army.

Buy Silence in the Desert from Amazon.com*
More Books by David Longridge

Silence in the Desert by David Longridge