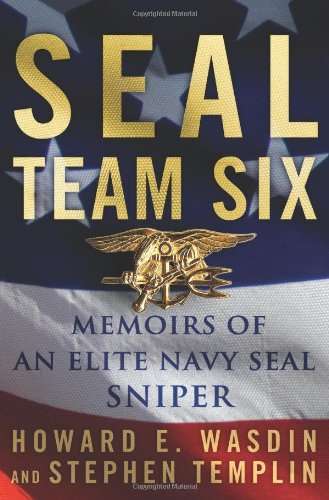 My rating for SEAL Team Six – 4

Thoughts:
“SEAL Team Six: Memoirs of an Elite Navy Sniper” by Howard E. Wasdin and Stephen Templin is a well written memoir which walks the reader through Wasdin’s childhood, Navy SEAL training, several missions and Mr. Wasdin settling down with his beloved wife and children.

This is an exciting book, an easy and fast read. While the authors cover a lot of ground, the book kept my attention throughout.

Especially poignant, for me, were the chapters about Somalia and the Battle of Mogadishu. I read a lot about that battle and Mr. Wasdin’s point of view is raw, honest and different from anything I read before. I am familiar with most of the people he mentioned and reading about them, the tactics and the battle from a different, on the ground perspective were an amazing experience for me.

I appreciated the chapters about the rough training and the reasons for it (“the more you sweat in training, the less you bleed in battle”), it is amazing the mental fortitude of these warriors which helps them go through, what seems to me, almost superhuman tasks.

A bit disturbing were the chapters about Mr. Wasdin’s childhood and the abuse he suffered by his step father. Mr. Wasdin credits that abuse with his ability to withstand pain and attention to detail, which I gathered he truly believes.

I don’t want anyone who read this book to think that if you beat the living hell out of your child he’ll turn out to be a Navy SEAL or an elite warrior. Mr. Wasdin does make that point very clearly in the book, but I didn’t feel he made it strongly enough or often enough.

During my service I have met many people from the special forces including the most elite units and the one thing common to all of the was the simple fact that this is what they were born to do.
You cannot learn or acquire the characteristics, capabilities and fortitude to become an elite warrior.
You either have those or you don’t.
Period!
You can hone your skills, find the hidden talents, sharpen them and practice to become better but you have to be born with them to begin with.

At the end of the book there is a section about the “Special Operations Warrior Foundation” founded in 1980 as a college scholarship fund for children of special operations warriors who have been killed. Please take some time to visit them and make a donation if you can.

So tell me, what is your favorite military memoir?

Synopsis:
The book is a behind the scenes look at SEAL Team Six, a unit which specialized in counterterrorism, hostage rescue, and counterinsurgency. Howard Wasdin writes about the grueling selection process, Basic Underwater Demolition/SEAL (BUD/S) and sniper school.

After going through the selection process, Mr. Wasdin faced combat operations in Desert Storm as a member of SEAL Team Two and got selected for SEAL Team Six. He was sent to Somalia on a mission to capture or kill Somalian warlord Mohamed Farrah Aidid.

BOOK BLOGGERS – Have you read “SEAL Team Six”? If so link up your review below: This post is in the 69th