About:
Rogue Heroes: The History of the SAS, Britain’s Secret Special Forces Unit That Sabotaged the Nazis and Changed the Nature of War by Ben Macintyre is a non-fiction book about the founding and early years of the British Special Air Service (SAS). Mr. Macintyre is a writer in England and author of several books. 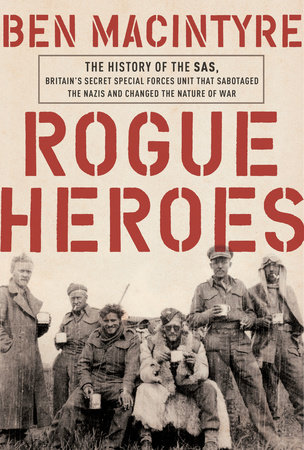 Thoughts:
Rogue Heroes: The History of the SAS, Britain’s Secret Special Forces Unit That Sabotaged the Nazis and Changed the Nature of War by Ben Macintyre tells not only of the early years of the SAS, but how Col. David Stirling brought a new kind of thought into the rigid British army. Fighting in small forces that focus on stealth and sabotage was at first laughed at but later proved to be a valuable strategy to any military commander. The early missions of the SAS were not very successful, but as the unit grew and gotten more attention they began to get more chances to prove themselves.

This is a history book, it does not follow a storyline or narrative. The author chose to tell his tale through important episodes which shaped the unit. The lighthearted story of a bunch of rogues and misfits who did not fit in the regimented military, turns into a dark narrative as the book shifts into the European theatre and the end of World War II.

I wished the author would have given a short history of other small forces and their role in history to put the SAS in perspective for today’s warfare. There has been many units which their role was to annoy the bigger enemy forces, keeping them on guard and lacking sleep before the big, final battle. The SAS was unique because it came out of a very regimented system which didn’t embrace the tactics, but learned to use it as part of their strategy quickly.

When I first started reading this book I could have sworn that the style of Mr. Macintyre’s writing style was familiar, I thought I knew exactly which book to look at for reference. Imagine my surprise when I realized this is the first book I read by the author, I’m still dumbfounded by it.