Rebecca of Salerno by Esther Erman is the story of Ivanhoe’s Rebecca of York, who left England to Italy. Ms. Erman is a scholar and author, who came to the US as a refugee at the age of five. 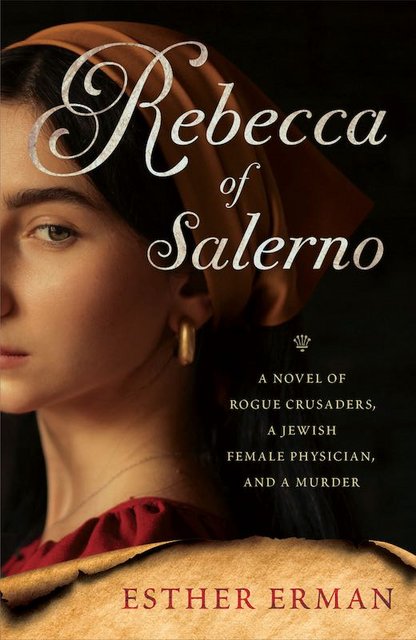 I was excited, but a bit nervous to read Rebecca of Salerno by Esther Erman. Rebecca of York is one of my favorite literary characters. I read Ivanhoe by Walter Scott a few years ago and was surprised at how good it was, and still relevant as well.

Ms. Erman, however, wrote a well-researched, exciting book which, I believe, certainly did justice to Rebecca of York. This book is historical fiction at its best, combining fictional and real characters, and exciting locals, and gives the reader a good idea about what it was like to live in Italy at the time.

Ivanhoe is mentioned just a few times in the book, Rebecca’s story is retold in just a few sentences so the reader understands where she’s coming from. While I highly recommend reading Ivanhoe, I certainly don’t think it’s necessary to enjoy this book.

The strength of this book is the fantastic research that went into the story, Jewish culture, as well as life in Salerno. I enjoyed reading about the medicine Rebecca used for healing, as well as her rebellious position of not getting married as expected of her.

One of the most surprising revelations in the book, was La Scula Medica Salernitana, a medical school that actually existed. The school did not discriminate and taught people of all religions (at that time Jews, Christians, and Muslims), as well as women.

Unfortunately for Rebecca, and for Jews over the centuries, fortunes quickly turn. At the end of the book, Jews are no longer welcome in Salerno and she leaves for the safe city of Barcelona. That, as we know from history, will not be safe in the future either.

Rebecca of Salerno gives the reader a glimpse into the past through the eyes of, what seems to me, a modern woman. I enjoyed this book very much and it made Rebecca even a better character than before. Certainly a high mark to achieve.

Rebecca of York has left England. Ivanhoe, the love of her life has married Rowena. Rebecca is a healer, whose success was so notable that she was accused of being a witch.

In Salerno, Rebecca discovers she is able to attend La Scula Medica Salernitana and become a physician. Rebecca manages to stay single, still in love with Ivanhoe, but also with Rafael, her companion. When a crusader knight gets murder, a visiting rabbi is left holding a bloody knife. Rebecca and her companions set out to clear his name.

Rebecca of Salerno by Esther Erman