Quichotte by Salman Rushdie is a novel that takes Miguel de Cervantes’ story The Ingenious Gentleman Don Quixote of La Mancha and updates it to the modern age. Mr. Rushdie is an award winning, and international bestselling, author. 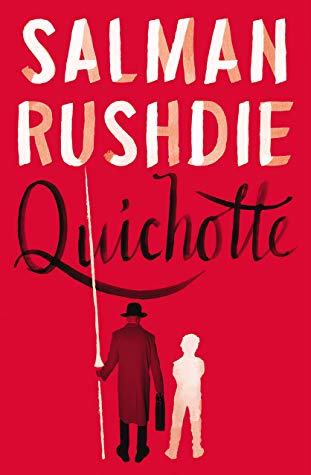 My rat­ing for Quichotte  — 5
Buy Quichotte from Amazon.com*
More Books by Salman Rushdie

I have thoroughly enjoyed the story of Don Quixote through several iterations since I was a kid, but it wasn’t until I read Edith Grossman’s magnificent translation that I actually understood the genius behind the book. Don Quixote is relevant and funny to this day, it is amazing to think that the story was written centuries ago.

Just as Cervantes made fun of the junk-culture in his era, Mr. Rushdie takes the challenge and goes to a literary war with the garbage that Americans are inundated with every minute of every day. He doesn’t forget to add some self-deprecatory humor which Cervantes himself is sure to would have appreciated.

As in his previous books, the author does not shy away from social criticism, he does not do so in a subtle manner, but more of a brute – in your face – style which leaves no room for ambiguity.  Mr. Rushdie, speaking through his characters, is obviously angry and somewhat disillusioned at the way society is behaving these days.

This is a parody, and an homage, which is character driven story able to stand on its own two fee. It take great big balls to try and re-write the novel for the contemporary age, but we know from history that Mr. Rushdie has what it takes, and so we got Quichotte.

Sam DuChamp , a writer of espionage novels, creates a character for his new novel named Quichotte (pronounced key-shot), a man loosely based on his namesake. Quichotte, a man in his late 60s or early 70s, is consumed with everything on TV, from dramas to idiotic reality shows – and especially with a Bollywood actress who is now a Hollywood celebrity and the apparent heir to Oprah herself – Salma R.

Quichotte and his imaginary son (who somehow becomes real) take coast to coast trip so the elder gentleman can profess his love to Salma. Slowly DuChamp realizes that Quichotte’s story is actually his own.

Just as Cervantes' Don Quichotte made fun of the junk-culture in his era, Mr. Rushdie goes to a literary war with the garbage that Americans are inundated with