I borrowed this book from my mother. 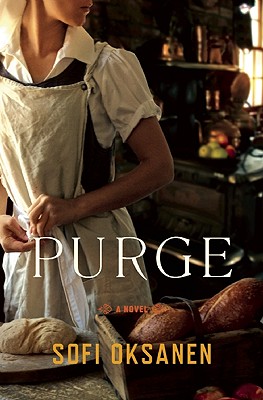 My rating for Purge – 5
Buy Purge from Amazon.com*
More Books by Sofi Oksanen*

“Purge” is a fictional story tells the story of three generations of Estonian women (and the men in their lives).The book chapters jump in time to tell the tale of some horrifying events in their lives which correspond to the historical events which take Estonia, in general, and their rural village specifically through WWII, soviet rule and independence.
The story centers around two women, Aliide Truu and Zara who is the victim of a sex-trafficking operation and ends up in Aliide’s home while running away from her captors. Only that Zara has a picture of Aliide and her sister, her arrival wasn’t coincidental. By the end of the book we find out how the women try to purge their soul, name and their past.
There is a psychological side to this book, which I felt was more fascinating than the historical side. Aliide’s motivations are a product of lost love and jealously, but her actions are a product of survival in an oppressing society; she cheats on her husband and turns in her sister to the authorities. Hans, Aliide’s brother in law and the subject of her fantasies, is a Nazi sympathizer and a murderer.
Zara, on the other hand, goes looking for easy money and gets caught up in the harsh and violent world of prostitution. When Zara arrives on Aliide’s doorstep, a Pandora’s box is opened and shines a light of decades of abused women both in Communistic as well as Democratic societies.
As mentioned, the book is not written in chronological order, but the story unfolds very simply, in a country where nothing seems as it is, under a government which is vigilant, oppressive, cruel and paranoid, yet has taken the role of a nanny which has many people so dependent on it they almost forgot how to take care of themselves.
The characters in this book are drawn very well, no-one is what he or she seems to be, the world is filled with dangers and the extremes we (Americans) are so used to simple do not exist.
The author, Sofi Oksanen, is a Finnish author. Her father is from Finland but her mother is Estonian. She was won numerous literary prizes including the prestigious Finlandia Prize in 2008.
“Purge” is a wonderful book; I highly recommend it to both men and women of all nations. I certainly hope more people will read this wonderful novel which, as we all know, don’t come around as often as we would like them to..