Pumpkinflowers: A Soldier’s Story of a Forgotten War by Matti Friedman is a memoir of his time holding a small structure on a hill in Lebanon during his time in the Israeli Defense Forces (IDF). Mr. Friedman, a Canadian living in Israel, is an award winning writer and author. 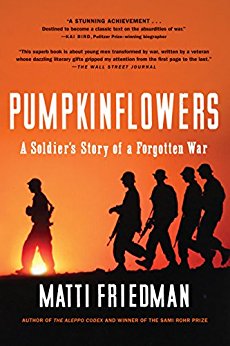 Pumpkinflowers: A Soldier’s Story of a Forgotten War by Matti Friedman is part memoir, part history lesson of the complicated relationship between Israel and Lebanon.  Pumpkin (dla’at) was the name of his base, a POS hole in at the end of the world, inside Lebanon. Flowers refers to the code name of injured soldiers (I always assumed, but I don’t’ know, that it’s because when most of us think of the words “soldier” and “flower” together Poppies come immediately to mind due to their World War I significance. And Poppies are red).

Mr. Friedman masterfully captured the environment of defending in a small, front-line hill – not knowing why and maintaining an “us vs. them” attitude to keep sane. The book reminded me of such times, moving from the boredom of kitchen duties and maintaining the status quo, to moments of sheer terror – and back again.

When I served in the IDF, during that same time (late 80s – early 90s) we, the grunts, quickly realized that Hezbollah is not a “terrorist group” as advertised, but an organized force with quality weapons and uniforms. This notion that the IDF is dealing with a ragtag group of imbeciles has led to many mistakes by leadership and almost a disaster not long ago.

This is an important book, but as far as I know, no history has yet been written and this personal memoir, an intense eyewitness, will be an important first hand source. The most interesting part, to me, was the author’s return to Lebanon, as a Canadian tourist. He goes visiting a country he otherwise cannot go in and even try to go back to his old haunting ground (Pumpkin) but this time from a road he feared and was never even allowed to walk on. That part is a strong indication of why the region will never be at peace, everyone he met wants to drive the Israelis into the sea, peace is simply not even an option.

The book is an easy read, I finished it in two days, while not very introspective (which I didn’t mind), I found it to be an accurate, detailed account.

Synopsis:
The book is divided into three sections.

The first is about Avi, a young Israeli soldier, his service and writings. The second part is written by the author about his time serving. The third, a most interesting narrative, about the author returning to Lebanon as a Canadian tourist to get a new perspective.

Buy The Pumpkinflowers from Amazon.com*
More Books by Matti Friedman

Pumpkinflowers: A Soldier’s Story of a Forgotten War by Matti