Professor at Large: The Cornell Years by John Cleese is a non-fiction book with speeches, essays, and interviews of the famed comedian. Mr. Cleese had the role of visiting professor at Cornell University and this book is a collection of some of his visits. 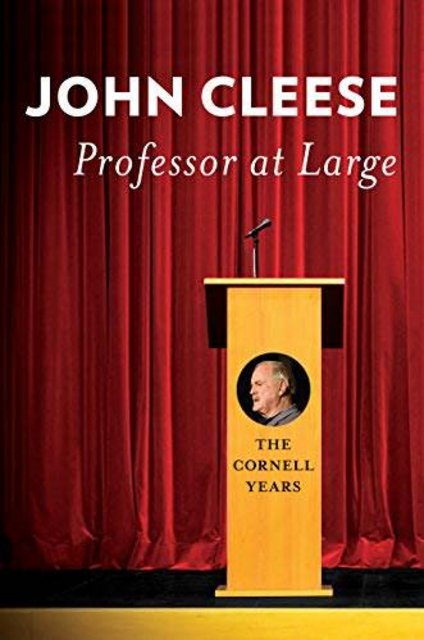 John Cleese has always been a favorite of mine. I still remember how much I enjoyed, and wondered why many didn’t, the movie Time Bandits. When I saw the book Professor at Large: The Cornell Years by John Cleese I did not know what to expect, but knew that it would most likely be up my alley and a joy to read.
I was right.

At first I had no idea that Mr. Cleese was Professor at Large at Cornell University. Frankly, I had no idea what “Professor at Large” is, luckily the introduction by Stephen J. Ceci made sure to make that clear right off the bat. Seems like Professor at Large, a visiting professor, is a six year term for an eminent person (Nobel laureates, Pulitzer Prize winners and other esteemed intellectuals) who are asked to come to the university twice a year, for two weeks at a time and give lectures, conduct interviews, give talks and more.
Basically, a person of note to come down and disrupt the schedule, allowing for students (and faculty) to see things from a different perspective.

The appointment of Mr. Cleese was such a huge success, that he was asked to renew his tenure two more years (the maximum allowed). Afterwards, the university felt that he is making such a huge contribution, and can continue to so, that Mr. Cleese was granted the title of The Provost’s Professorship, an initial five year term.

The book consists of seven parts, from lectures, to conversations, to transcripts of seminars. Each one intellectually stimulating, intelligent, and thoughtful. I always assumed that many comedians are intelligent people, one can tell from Mr. Cleese’s projects how his intellect has affected the material. I had no idea how bright Mr. Cleese is, how far his interests take him and that he is able to carry an intelligent conversation with many luminaries as an equal.

The highlight of the book, for me, was Mr. Cleese’s conversation with Academy Award winner William Goldman, a novelist (The Princess Bride, Marathon Man), playwright (Butch Cassidy and the Sundance Kid, The Princess Bride, All the President’s Men), and screenwriter (Butch Cassidy and the Sundance Kid).  The transcript has a wonderful back and forth between the two men who spent years in the entertainment industry and are disillusioned, but still love the work.
This section alone was, for me, worth buying the book.

In this age, where anti-intellectualism is sadly seen as positive personality trademark by many, it’s nice to read a book which doesn’t shy from it, but embraces this aspect of humanity. An enjoyable, easy to read, entertaining and smart book.

Professor at Large: The Cornell Years by John Cleese