About:
Profane Fire at the Altar of the Lord by Dennis W. Maley is a historical fictional story taking place in Europe during the 1600s involving a dwarf Jew who cons European Jewry into thinking he’s the Messiah, an Italian actor and European royalty.

. This is the author’s second novel. 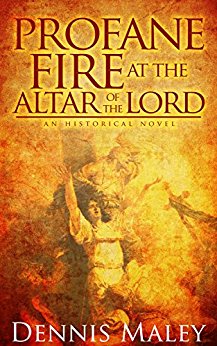 Thoughts:
It’s difficult to describe Profane Fire at the Altar of the Lord by Dennis W. Maley, the book is part fiction and part history to give context to the fictional story and elements presented. The novel touches on several themes, religion, ideology, and self-worth are some of them.

The story telling is done tongue in cheek, the readers are privy to the lies, manipulations, and political maneuvering getting an overall picture of what is happening. There are many historical characters interacting with the fictional ones, which makes the story seem much more believable.

It seemed the author did much historical research, the narrative which give historical context to the story are weaved in as separate chapters from the actual story until they meet at the end. This is, however, not a history book but what I like to call “American voter” type of history. Mainly told in short spurts that were relevant to the story but ignored many other aspects – which surprisingly was fine with me since they were meant to move the story along.
It’s not “bad history”, but certainly an incomplete one, providing facets just relevant to the storyline.

I enjoyed this book, it was funny, irreverent, and sometimes sad but certainly kept my interest.

Synopsis:
David, a dwarf specializing in reading people found himself destitute and without money. To make a living he establishes a new identity, that of a prince of a lost tribe of Israel.

To David’s astonishment, not only does his lie being believed, but it also snowballs into a bigger story which gets out of proportion and control making him the new Messiah. To aid David, he hires an actor, Diogo, which knows his secret.

Buy Profane Fire at the Altar of the Lord from Amazon.com*
More Books by Dennis W. Maley