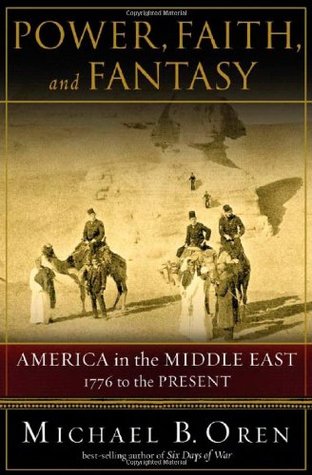 The book states that the policies towards Middle East has been coherent in the 18th Century, but now they are a mess, as is the region itself. Mr. Oren does a fine job observing neutrality throughout the book, especially on contentious issues, quoting policy makers and careful not to take a stand himself.

Besides objective history, Mr. Oren also writes about the personalities involved, including little anecdotes which always make history fun. It was amazing for me to read how much Christian restorationism has influenced American policy before World War II and how the AIPAC has influenced policy afterwards.

The book is big on details, but the narrative is entertaining and interesting. I applaud the author for going through, what seems like, a fantastic amount of research through primary sources and governmental records.

Buy Power, Faith and Fantasy from Amazon.com*
More Books by Michael B. Oren

Power, Faith and Fantasy: America in the Middle East, 1776 to the Present by Michael B. Oren