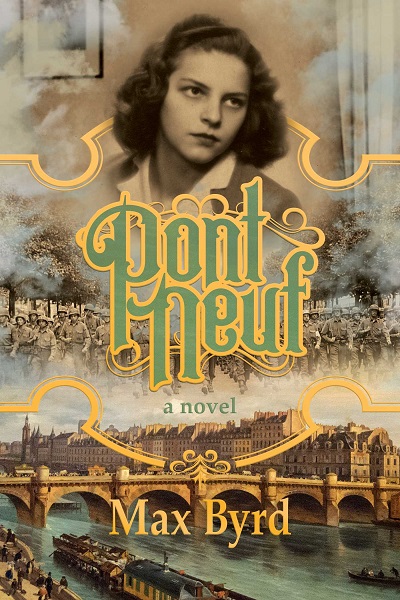 Thoughts:
This was a very well written book, the subject matter was interesting, seeing the war through a different perspective. I have read one, or several, WWII novels told through the eyes of female photographers and /or journalists and they were not memorable.

Pont Neuf by Max Byrd was a bit of a strange / hybrid read, as if the author had a difficulty bridging between the history and fiction, a difficult task I’m sure. As in many others novels of this type, there are several real life personas interacting with fictitious ones in order to tell the story, or more it forward. Several times though, the story either just skipped forward or was pushed through the narrative.
I get that this is a very difficult way to tell a story especially during that time.

There are guys involved, an unexpected turn of events towards the end. I don’t understand why Ernest Hemingway makes an appearance, or is part of the story. Martha Gellhorn his wife is an integral part of the story, but Hemingway himself isn’t. The famed author could have just stayed in the background, always there but not present and the novel, in my opinion, would have been better for it. The view of wartime Paris from the eye of woman is not something I care about, fashion, sex, etc. Being what could possibly be the luckiest city in Europe at the time (neither the Allies nor the Axis wanted to destroy it or fight in it).

I thought the author did a great job showing how enhanced emotions are during a time of great difficulty and challenges. Where a person gets attached, very quickly, to another without a long courtship. Those occupy your thoughts through the hardships and one can have a “relationship” with very little contact.

Pont Neuf (New Bridge), the oldest standing bridge in France, ironically, is the title of this work… but it’s virtually missing from the book. Maybe I missed something, but I don’t get why that’s the title– but that’s something small I noticed since I rarely pay attention to it after I started reading the book.

This was an enjoyable book, I’ve read similar novels taking place at the same time, with similar characters before. I’m not sure what the author was trying to say though.

Synopsis:
Annie March arrives in France, 1944 after D-Day, from the United States to write about the war. Annie’s mentor is Martha Gellhorn, an ace reporter, editor, who is in a troubled marriage to writer Ernest Hemingway. Annie gets to know several soldiers and takes on photography to tell her story.