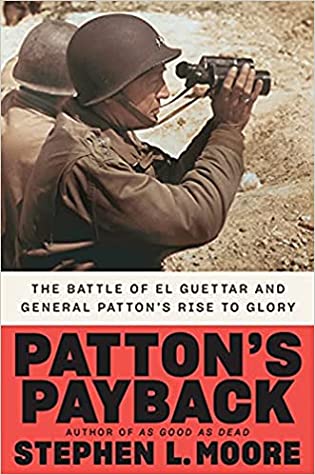 Overall, book introduces the readers to General Patton, as seen through the North African battlefield, and throughout the theater. Patton was put in charge of the 2nd Armored Division, becoming a prominent, indeed, the prominent, warrior in the US armor doctrine.

Patton’s Payback: The Battle of El Guettar and General Patton’s Rise to Glory by Stephen L. Moore tells of the events which lead to Patton successfully turning around a losing battle, as well as becoming the face of the US Army in the African campaign. How Patton shook up the troops, restored discipline, and earned the men’s respect by leading from the front, particularly not afraid to face danger himself.

I especially enjoyed reading about the overall viewpoint of the campaign from different aspects, which certainly gave me great insight. We see the campaign through the eyes of Eisenhower, Patton, field commanders, soldiers in the trenches, as well as the Germans.

The high and low overviews, however, are also the weakness of the book. The author goes into great detail about the fighting, introducing dozens of men, and narratives. Nevertheless, this is a well-written, well-researched historical account of the events which led to the victory of the Allied forces, led by Patton, over the Axis forces, led by General Erwin Rommel.

Strangely, George Patton himself is very little in this book, because the author concentrates more on how his command affected the battlefield, then worrying about biographical information. Former Chief of Staff of the Israel Defense Forces, and politician, Rafael “Raful” Eitan (רפאל “רפול” איתן) used to say that “discipline starts at the shoestring”. I have a feeling that Eitan and Patton would get along famously together.