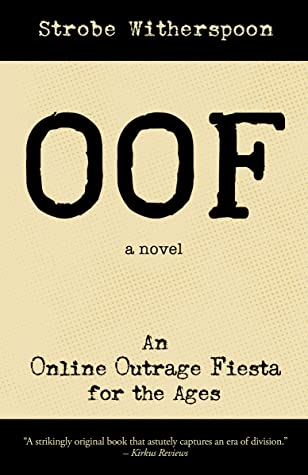 Unfortunately for all us of, and like all good satire, OOF: An Online Outrage Fiesta for the Ages by Strobe Witherspoon is not far from the truth. Not necessarily in subject matter, but in analysis of the fake outrage machine that has been building for decades.

Old literary mechanisms such as sample chapters, articles, and letters (emails) are being used, as well as new ones. Tweet storms, blog posts, and vblog transcripts are also transcribed (which I guess could be equivalent to opinion pieces). Sadly, these highly emotional opinion pieces are replacing legitimate news sources, if there are any left.

While the premise of the book is outlandish, it is not out of the realm of possibility in this crazy, partisan world. Our only saving grace is people’s short memories, as well as the need to move from one fake outrage to another very quickly.

This clever books attempts, and succeeds, to mimic the online reality by having the reader constantly question what is true. I don’t think we actually ever get a straight answer, as everyone in it are unreliable narrators. Strobe Witherspoon himself is found to falsify information, and others promote conspiracy theories and conjure up “truths” which they claim are between the lines. Putting together unrelated events, people, and “news” they want to believe, which roam around in the echo chambers they visit.

The author’s fictional book, FLOTUS, is being ripped apart before it’s even released. No one knows what it’s about, it’s not well written, and it might have just disappeared from public consciousness if they were just leave it alone.

OOF, however, satires the low hanging fruits of Internet politics and “experts” very well. The circus which ensues, while fictional, is believable and I could easily see how it could come to pass.

It was very concerning how this satire is so close to reality. That being said, our culture, especially the Internet crowd, certainly deserves to be exposed, and what’s better than comedy as a warning?

Strobe Witherspoon is about to publish a new novel called FLOTUS: A Memoir. While fictional and nameless, FLOTUS is clearly inspired by Melania Trump.

The book is not even published, when a frenzy of conspiracy theories arise in cyberspace. Some say this is a thinly disguised biography based on Witherspoon State Department work. After a chapter is leaked, journalists dig into Witherspoon’s past in attempts to discredit him.

From there, the world as we know it turns upside down.

Buy OOF: An Online Outrage Fiesta for the Ages from Amazon.com*
More Books by Strobe Witherspoon*

OOF: An Online Outrage Fiesta for the Ages by Strobe Witherspoon