About:
One Night in Winter by Simon Sebag Montefiore is a historical fiction story taking place in Russia, right after World War II. Mr. Montefiore is an award winning historian whose book Jerusalem: The Biography was a favorite of some guy named Clinton. This is his second novel. 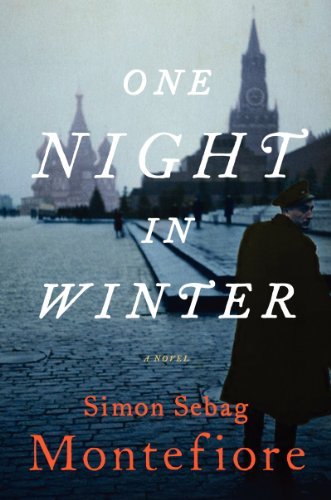 My rating for One Night in Winter – 5

Thoughts:
One Night in Winter by Simon Sebag Montefiore is an excellent novel, enjoyable, intelligent, easy to read and factual. This is one of those rare books which transports the reader to another time and another place.

The author manages to weave historical characters (Stalin, Molotov) with fictional characters flawlessly. The feeling of government paranoia is conveyed with a believeable fashion which sucks the reader into the days before the Cold War began, when Stalin was resting on his laurels from winning World War II, but still suspicious at his people, and especially his generals.

The character of General Hercules Satinov (what a wonderful name), Stalin’s advisor and a full member of the politburo was drawn wonderfully. A man of steel on the outside, we get to know what his inner turmoil when being led into a trap by Stalin and falling in love with another woman, something he wouldn’t allow himself to do.

The center of the story is a group of kids from various classes who get arrested and interrogated. Most of the kids are children to upper class parents (generals, politicians, entertainers) and think they’ll be all right. However, Stalin sees this as an opportunity to test the loyalty of the parents to the state (meaning himself) and uses them to his benefit.

This novel, by an outstanding historian, is a gripping, intelligent story. The author adds some historical / facts vs. fiction notes at the end which are always welcomed and, in my eyes, add an extra dimension to any historical novel.

Below is the song Katyusha which is referenced in the book several times and, to be honest, played in my head most of the time I was reading it.

Moscow 1945. As Stalin and his courtiers celebrate victory over Hitler, shots ring out. On a nearby bridge, a teenage boy and girl lie dead.

But this is no ordinary tragedy and these are no ordinary teenagers, but the children of Russia’s most important leaders who attend the most exclusive school in Moscow.

Is it murder? A suicide pact? Or a conspiracy against the state?

Directed by Stalin himself, an investigation begins as children are arrested and forced to testify against their friends – and their parents. This terrifying witch-hunt soon unveils illicit love affairs and family secrets in a hidden world where the smallest mistakes will be punished with death.