One Man Against the World: The Tragedy of Richard Nixon by Tim Weiner is a non-fiction book about the presidency of the 37th President. Mr. Weiner is a Pulitzer Prize and National Book Award winner. 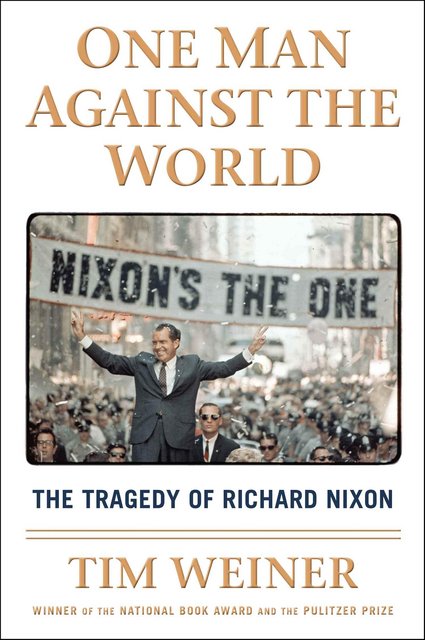 One Man Against the World: The Tragedy of Richard Nixon by Tim Weiner is a portrait of the late president, shedding light on how the Vietnam War and Watergate were, in fact, linked.  Furthermore, in the beginning of the book, the author states that Richard Nixon is a “great-bad man”, a viewpoint I never thought about, however I can actually see the point.

Mr. Nixon was full of contradictions, moreover an anti-Semite with Jewish top adviser, a peaceful Quaker who, on the other hand, wanted to use nuclear weapons. A man whose primary responsibility included enforcing the laws however who had no qualms about breaking them. A chosen leader who alternatively saw a large part of his followers as enemies.

This book was indeed an eye opener. The figure of Richard Nixon, a puzzle in death as much as in life, still has historians bewildered, let alone mystified. Mr. Weiner does not like his subject very much, and it shows. To Mr. Weiner’s aid, however, comes Richard Nixon himself. Using Nixon’s own words, the author shows that Nixon was a vindictive and sometimes petty who despised criticism.

From sabotaging peace talks at the Johnson administration, to bombing neutral countries during the Vietnam War, this book is an amazing document of a “great-bad man” and his time in office.

Buy One Man Against the World from Amazon.com*
More Books by Tim Weiner

One Man Against the World: The Tragedy of Richard Nixon by Tim Weiner