Northern Wrath by Thilde Kold Holdt is Norse mythology story, taking place in this world and the worlds between. This is Ms. Holdt’s debut novel, part one of the Hanged God Trilogy. 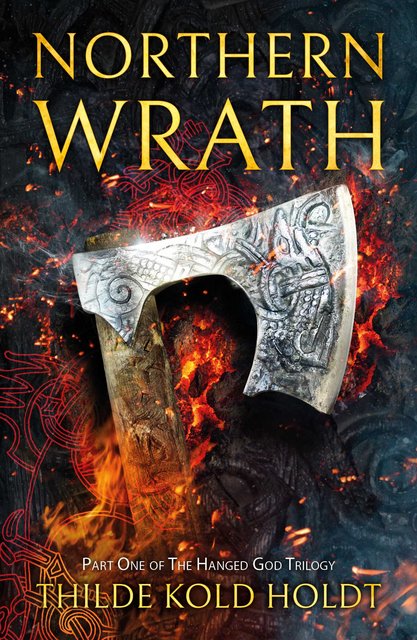 I didn’t know what to expect from this book. I’ve read other books bout Norse mythology, several were good, others were so-so, but not too many were simply excellent.

Northern Wrath by Thilde Kold Holdt falls squarely into the latter category. A long book, which is easily read, entertaining, as well as having kept my interest throughout.

The book follows several characters, and juxtaposes between them each chapter. We follow along, and see the world, underworld, and other worlds through their eyes.  Their stories are personal, riveting, and yet very relatable and approachable.

There is no need to have any knowledge of Norse mythology to enjoy this book, however it will enhance your experience. That is true for almost every book, however, or even movie. The underworld is a violent and lonely place, blood binding, as well as other aspects of the mythology are touched up (no giant goats, I’m glad to say).

The characters are well written, especially the women. They are mothers and wives, daughters and sisters, heroic and compassionate, as well as fierce warriors on par with their male counterparts.

I actually enjoyed the fight scenes, not one of my favorite aspects of these type of books. They are grim, violent, and dark. However, they are also beautifully written and engaging.

The author juggles the multiple worlds and multiple viewpoints with style and elegance. I was never confused about which story-line I am following, which is a testament to her competency. The world-building is fantastic and easily immersible.

I enjoyed this book so much, that I went ahead and already bought book 2 of the Hanged God Trilogy, Shackled Fates. Frankly, I didn’t even know the second book was out, but I’m glad I didn’t have a long wait to read it.

Hilda’s father, Ragnar, is about to die – and not a good death according to his daughter. Ragnar is dying in bed and will be permitted to enter Valhalla. When Ragnar dies, he predictably goes to Helheim, the Norse underworld which is horrible even if you’re dead.

Hilda and her childhood friend, the Chief’s son, Einer find their world and Norse way of life is under threat by invading Christians. Additionally, even the Norse Gods are threatened by Christianity.

After a bloody attack on their village, the Vikings seek revenge. But the Norse Gods, afraid of Ragnarök, have other plans to benefit themselves on the backs of their believers.