About:
The New World by Andrew Motion is a continuation from his previous novel Sil­ver: Return to Trea­sure Island, both are sequels to Robert Louis Stevenson’s Treasure Island. Sir Andrew Motion was poet laureate of the United Kingdom for about a decade or so. 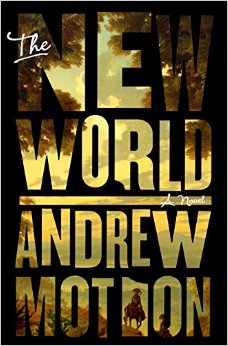 Thoughts:
The New World by Andrew Motion continues from where his previous novel, Sil­ver, ended. Our two heroes, Jim Hawkins Jr. and Natty (daughter of Long John Silver) are the only survivors of a shipwreck and have lost all of the treasure they found in the previous novel. From the quick “last time on…” prologue, the author quickly dives into the action.

As it turned out Jim & Natty are stranded in the territory of Texas and are taken in by hostile Indians. They managed to narrowly escape and then, greedily and inexplicably, steal the silver necklace of the psychopathic leader, Black Cloud. The couple spends a few years with Indians whose hospitality does not border on homicide and enjoy their freedom farming and hunting. To get back to England though (and escape Black Cloud) they travel with an entertainment band to the port of New Orleans.

This is a well written novel and Mr. Motion did justice to Stevenson’s story but I thought the balance between descriptions and story erred on the side of being descriptive. The characterization of the two protagonists is very good, however that comes at the expense of the rest of cast.

I don’t know what the author was trying to do with Natty, she is painted as a bitch toying around with Jim’s affection for years and years while he follows her around like a puppy in love despite her treatment of him during their years of shared imprisonment, beds, and adventures.

The other issue with the novel, and maybe that’s just the history buff in me speaking, is that it looks at several cultural issues, especially those involving the indigenous tribes in America, from today’s perspective as oppose to the one prominent during the time the story was told. It is almost a time-travel story where Jim and Natty are transported from today’s world centuries backwards.

It is a brave endeavor to write a sequel or a prequel to existing, classic novels and Mr. Motion does justice to Stevenson’s style and story. I thought the novel was enjoyable and a worthwhile read, but it felt more like one of Mr. Stevenson’s travel books than a Treasure Island novel.