Never by Ken Follett is a political fiction book spanning the globe from intelligence agents fighting terrorism in the Sahara, and the implication they have up the chain to Presidents and generals. Mr. Follett is a bestselling author known for his Kingsbridge series. 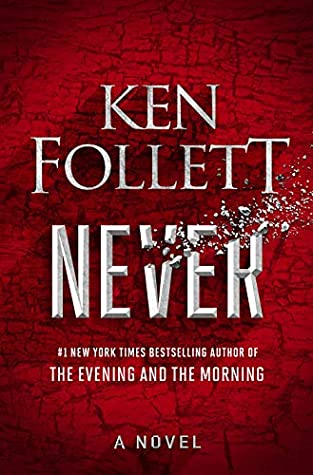 My rating for Never – 5
Buy Never from Amazon.com*
More Books by Ken Follett*

I always liked Ken Follett’s writing and was eyeing this book for a while before picking it up. I only read his historical fiction stories and did not know what to expect.

I was in for quite a ride, starting with intelligence agents, to being a fly on the wall at international policy meetings. Despite its girth, I found it difficult to put Never by Ken Follett down.

My favorite part of this cautionary tale was almost a step-by-step telling of how on-the-ground intelligence impacts national policy. How quickly things can escalate to international levels from the ground is really done well, and seemed plausible to me.

This is an exciting novel, with an international landscape. However, I never got the feeling that Mr. Follett used the setting just for glitz and glamour as they are in many other espionage books. There are no glamorous casinos or fancy hotel rooms, just gray people working their gray jobs in less-than-ideal conditions.

I enjoyed the characterization as well. Each person, to me, seemed real and fully realized. From the Arab refugee to world leaders – they all certainly get the same consideration and life story – as they should.

The United States and China, two superpowers, are also entangled in a struggle for leadership. The United States is struggling to understand the new world, (one of the points of the non-fiction book After the Apocalypse by Andrew Bacevich) as well as keep hawks away from the nuclear arsenal. China’s new crop of leaders is busy with the old Communist hawks vs. those who realized that war with the United States is a no-win scenario.

This book worked, for me, on many levels and kept my interest throughout. I couldn’t believe that, after 800 pages, I didn’t want it to end.

In the Sahara Desert, intelligence agents from the US and Europe are following a drug cartel. The drugs are used to sponsor terrorism across the globe.

In China, the head of intelligence, a senior government official, wages a battle against the old Communists who are refusing to admit that reality has changed. The old hawks are pushing China and North Korea to an unwinnable situation.

Pauline Green, President of the United States, must navigate all these issues, as well as political attacks. Doing her best to navigate in treacherous diplomatic waters she is doing all she can to avoid an all-out war.