More Noble Than War: A Soccer History of Israel-Palestine by Nicholas Blincoe traces the history of soccer in this small region of the world. Mr. Blincoe has written for radio and television, as well as several novels. 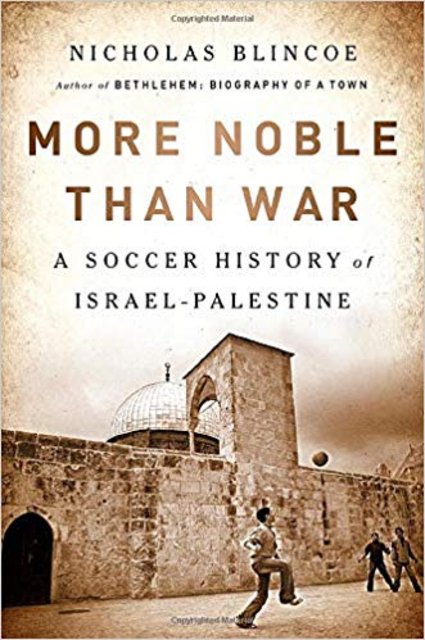 I have long ago realized that many things are more than they seem, and that politics seem to be encroaching on every aspect of our life. From schools, to the arts, and of course to sports. It is even more prominent in a part of the world where the politics are as divisive as ever.

The first thing I noticed in More Noble Than War: A Soccer History of Israel-Palestine by Nicholas Blincoe is that the author does not shy away from difficult and awkward historical or political issues. The second thing I noticed is that he is squarely in the Palestinians’ corner. That is fine, but I thought I’d mention it since the title could be misleading. To the author’s credit, he gives a bit of history about himself at the start of the book, informing the reader that he is married to a Palestinian woman (film director Leila Sansour) and lives, at least part time, in Bethlehem (the tile ” More Noble Than War ” is based on a chant Palestinian soccer fans use).

One would think from the book will mirror the structure, or even economics, of a soccer game, two teams against one another. But like many situations, this is a simplified scenario and the author does well to stay away from that false narrative, which is popular simply because it’s easy to understand. Much like the region’s history, the history of soccer in the area is complex and reflects the interest of the rich and powerful, much like it is today.

The book, however, did not go either here or there. It touches on the way special interests manipulated the sport, and touches on the passion that fans and activists feel – but doesn’t dive into either. The author also seems to harp over the crimes committed by Israel (actual crimes, like murder of Palestinians by citizens), but totally gloss over the Palestinian crimes.

The book shines when Mr. Blincoe goes to field (literally and figuratively), watching games, navigating Palestine and Israeli roads and traffic, and interviews those who control the teams. I would even say that the book can be divided between Blincoe the historian and Blincoe the reporter, each of them deserves their own separate book.

More Noble Than War: A Soccer History of Israel-Palestine by Nicholas Blincoe