About:
Mjolnir by Brian James is a fictional book telling about the old Norse gods, now living on Earth trying to make ends meet. Mr. James is a seasoned writer, Mjolnir is his second novel. 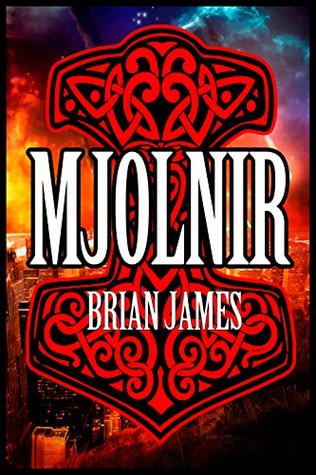 My rating for Mjolnir – 4
Buy Mjolnir from Amazon.com*
More Books by Brian James

Thoughts:
I liked the concept of Mjolnir by Brian James, telling of the Norse deities to living as us mortals, although keeping their god like powers. I would have assumed that with old age comes wisdom, but it doesn’t seem like the Norse gods have learned much over their long life span. Thor, Loki and Frey are still acting as if they just graduated college, trying to figure things out.

This book straddled the funny – cheesy borderline, but this is on purpose as the author clearly set out to write a fun story with tongue firmly held in cheek. I enjoyed reading the book and loved the pop-culture references, but it almost seems as if the author tried too hard. Not every paragraph needed a joke or an off the cuff reference to work, I enjoy those things work a lot better if they are sprinkled in the narrative and not force in.

The plot is weak, the perspective reader will know what’s going to happen pages in advance, but the jokes and dialog keep you reading regardless. The story-line turns dark and violent here and there, nothing that you wouldn’t read, or worst, in the actually mythology stories though.

This is an imaginative and funny book, much of it is well written in a crisp narrative. The characters are the way they are in Norse mythology, there isn’t much development or introspection but to be honest, I didn’t really expect it or missed it.

Synopsis:
Odin has kicked out the Viking gods from Asgard, now they are trying to survive on Earth as mere mortals. Thor found a place in the NFL, Freya is a high end prostitute, Loki is successful salesperson on TV and Odin is the richest defense contractor in the world.

They all live in fear that a prophecy which declared the end of time, known as Ragnarok, is about to come true. The key to survival is control of Mjolnir, Thor’s hammer.