Liberated: A Novel of Germany, 1945 by Steve Anderson takes place during the German occupation after World War II. Mr. Anderson was a Fulbright Fellow in Munich, Germany and his research prompted the writing of this book. 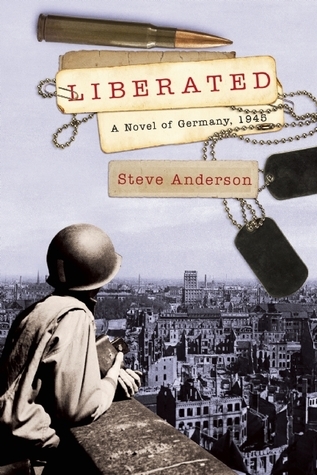 My rating for Liberated – 3
Buy Liberated from Amazon.com*
More Books by Steve Anderson*

I really enjoyed the author’s previous book, and bought this book (and the next) as well. I have noticed his first book, The Losing Role, is well researched and well written.

Liberated by Steve Anderson has a lot going for it. The history is fascinating, the story is intriguing, the author touches on subjects which are not talked about much such as the prejudice towards patriotic German-Americans and more. I enjoyed reading about Captain Kaspar’s inexperience and naïveté, coming into an occupied land still crawling with Nazis, Nazi sympathizers, as well as displaced persons just trying to survive.

The book, however, did not work for me as much as the previous book did. The romance with Katarina seemed force, and Harry’s attempt to halt corruption, under the shadow of genocide seemed out of place.

I appreciated the effort to show how war can corrupt even the best of us, whole communities in fact. Maybe the author tried to put too much into one book, but I found myself, at some points, just reading to finish.

I enjoyed reading about Katarina’s journey. A famous singer and actress, she found herself working propaganda for the Reich and is now associated with them to her dismay. She spends her time helping victims of the war regardless of who they are, or where they came from.

As I previously mentioned, the research Mr. Anderson did is fantastic, and that alone worth reading the book. I already have the next book in the series and will certainly read it soon.

Captain Harry Kaspar is posted in a Bavarian town named Heimgau. However, instead of him being in command he finds a Major Membre already there.

Soon Harry discovers that the Major and others are running a ring to fake artwork, and might have committed a horrific murder. Together with Katarina, a German actress, Harry defies the odds and fights back.

Liberated: A Novel of Germany, 1945 by Steve Anderson