About:
Last Heir of the North: A Legends of Tivara Story by J.C. Kang  is the fifth installment of the Scions of the Black Lotus series, in which we find out more about Lilian’s  history. Mr. Kang is a Chinese Medicine doctor, martial arts instructor, and technical writer to pen epic fantasy stories. 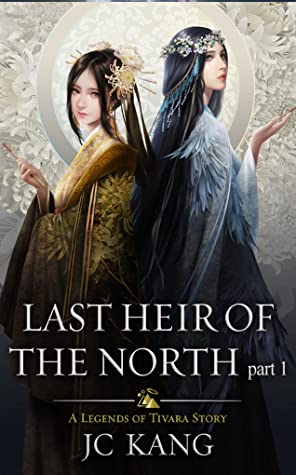 Thoughts:
This book might, on the surface, seem like a simple tale of revenge, but the author added complex layers of political intrigue and manipulations to the mix. The result is a fascinating story, fast action scenes accompanied by a plot telling Lilian’s history, slowly unraveling.

The narrative of Last Heir of the North by J.C. Kang is told through flashbacks, and I thought it was written quite well. The flashbacks move and back and forth in time and to the present, but there are clear breaks in between, the narrative follows and the story is coherent.

The novel was an engrossing read which moved the overall story forward in leaps and bounds. The story went from one of fantasy world building of a secret clan of assassins, to that of a mystery around Lilian’s background and how it would affect the country’s politics.  Half-elf Jie is still the star of the book, attempting to figure out why Lilian betrayed the clan, the story has begun to evolve through the flashbacks. While I found the mechanism in which the author devised the flashbacks a bit awkward and clunky, almost a deus ex machina cliché, at the end it worked and I bought into it quite easily (to my own astonishment).

This is the longest novel of the series, but it is also the most fascinating and sheds light on the mystery of Lilian. The novel did leave many unanswered questions, which I can only hope will be answered in the next, and last, installment.

Synopsis:
The North is rebelling against the Chinese Emperor, intending to secede from the Empire. Last time this happened, Lord Yu and his family were killed for treason, the only survivor was the three year old daughter, Yu Mei, witnessing the murders.

Half-elf Black Lotus assassin Jei, Tian, and their friends have captured a Fixer which might hold the secret to why Jie’s best friend and lover, Lilian, betrayed the Emperor, for which Jei was forced to kill her.

Buy Last Heir of the North from Amazon.com*
More Books by J.C. Kang*