Killing Patton: The Strange Death of World War II’s Most Audacious General by Bill O’Reilly & Martin Dugard tells of the famous general’s exploits during World War II, exploring the possibility (as remote as it was) that he was assassinated.  Mr. O’Reilly is a TV journalist with his own show on Fox, and Mr. Dugard is a best selling author. 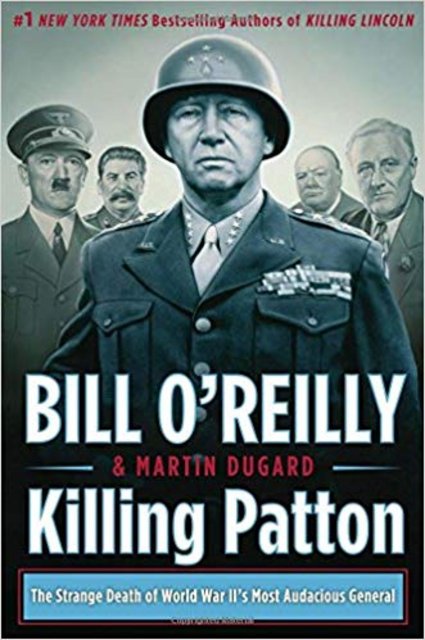 As someone who has a great interest in the World War II era, I was looking forward to reading this book. Killing Patton: The Strange Death of World War II’s Most Audacious General by Bill O’Reilly & Martin Dugard has been recommended to me by a few people who knew of my interest, all of them are avid viewers of Fox News.
I blame myself, as I should have know better (and I am by no means a bleeding heart liberal).

This book takes every gossip, rumor, and worst, historically discredited banality about  World War II and presents them as undisputed facts. The authors claim, right off the bat, that the famous car crash that killed General Patton was much more than just an accident. The authors insinuate that Bill Donovan, known as Wild Bill, head of the Office of Strategic Services (OSS), was involved, when the tough general refused to die he was shot in the neck with some sort of projectile, and when that didn’t help… get this… Soviet agents broke into Patton’s hospital room (in a US Army American hospital in Europe) and finished the job using poison, me thinks.

Then the authors have the audacity to claim that they are “not conspiracy theorists”. To prove that claim, the authors bring “proof” such as that of a US counterintelligence officer, who said that someone told him that Soviet dictator Joseph Stalin wanted Patton dead (third degree hearsay). I think the list of people Stalin didn’t want dead would be shorter. Then they present a soldier who was presumably told by Wild Bill, a cunning spy master well versed in doublespeak and innuendos, that he flat out told him to murder Patton.
All this with zero evidence, by the way.

The authors seem to think Patton’s military genius was held back by General Dwight Eisenhower, and if he only let him loose he would have driven to Berlin with his 3rd Army and won the war. While Patton was an excellent military general, a genius in open pursuit, he was not the extraordinary superhuman the book makes him out to be. This, I feel, is not only a disservice to the other fine folks who fought the war, but to General Patton himself.

Finally, the book practically skips over the whole “killing” part. There is very little, if any, mention of the investigation following the crush. There are some hints and innuendos about some ridiculous conspiracies but no follow up.  Either the authors didn’t do their research, or, more likely, there simply isn’t enough evidence to support their outlandish conspiracy theory.