About:
Kidnapped by Robert Louis Stevenson is a novel following David Balfour, an orphan whose only relative is trying to cheat him out of his rightful title and inheritance. Check out some fun facts about Mr. Stevenson, his life, travels and writings. 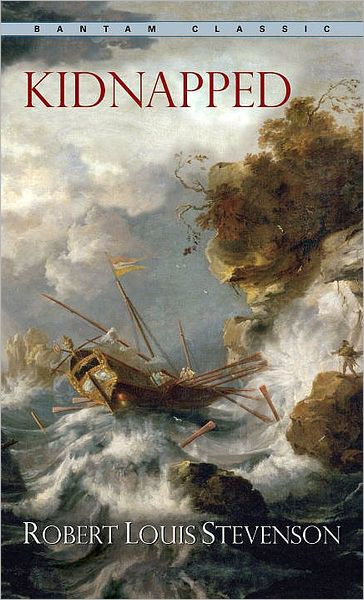 Thoughts:
I have read this book previously, I don’t remember at what age but it has to be before I turned 12. At the time, of course, I had no idea that it was a classic and famous book. I was even surprised to find out that it was even a movie later on in life. The book did make an impression on me and to this day the character of Alan Breck Stewart is, to me, the quintessential penniless Scottish aristocrat.

Re-reading Kidnapped by Robert Louis Stevenson with the benefits of being an adult, allowed me to see the novel from a different perspective. One of the things I realized when reading Treasure Island was that the story, as read from a perspective of an adult, is actually about Long John Silver, not Jim Hawkins as I previously thought. As a young man I identified with the struggles of David Balfour, and did so as an adult but I did get more insight into the character of Alan Breck, as well as the historical viewpoints, as seen by the Scotts.

What I realized is that this seemingly simple novel is a masterpiece. Masquerading as an adventure novel of a teenager it is also a travelogue and have a fantastic theme about the meaning of friendship and family. Mr. Stevenson also weaves in the historical events of the Appin murder of May 1752, the killing of “the Red Fox”, into a compelling narrative in which our heroes have address, as well as avoid the hangman’s noose on their travels.

What I remembered as a tale of adventure and romance, is actually a somber book taking a look at the doomed, but proud Scottish rebel. What had me wonder is what David Balfour left out, as he only tells of “the worst part of my adventures”.

Synopsis:
Young David Balfour is tricked by his uncle, who sold him to a ship bound for America. Rescued by Scottish lowlander Alan Breck Stewart, a fugitive himself, David goes on a journey throughout Scotland to get back his rightful inheritance.