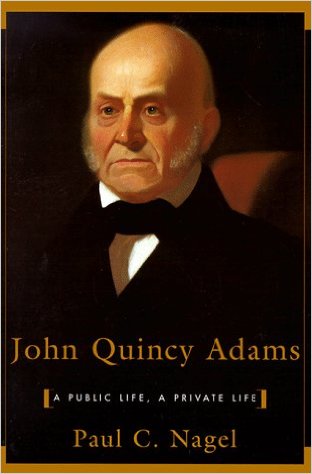 My rating for John Quincy Adams: A Public Life, A Private Life – 4

“John Quincy Adams: A Public Life, A Private Life” by Paul C. Nagel is a biography of the sixth president of these United States. JQA, as he referred to himself to be distinguished from his prominent father, was a melancholy politician who would have rather been a man of letters, than the lawyer / diplomat / politician he turned out to be. The book is based mostly on JQA’s diary which spanned an amazing seven decades – arguably the “most valuable historical and personal journal kept by any prominent American”.

Buy this great book here, even if you won’t read it – it looks great on the shelf*
More books by Paul C. Nagel*

As the author mentions in the preface, this book is more of a character study of a person thought to be an elitist and out of touch, than a historical biography. The four years of JQA’s presidency get a mere chapter, but as noted, many of JQA’s accomplishments were not done in his own presidency, but rather as an ambassador or as a high level cabinet official.
Nagel’s ability to understand several sides of this talented man, who is tormented by his own perfectionist demons as well as the loving grandfather and a hard headed legislature, is a masterful accomplishment for any historian. The book is written from JQA’s point of view, for example the treatment of his mother, Abigail Adams, is much harsher as a domineering pushy mother, than David McCullough which treats her as a strong woman equal to her man in his excellent book “John Adams” (book review).
Peppered with humor, some supplied by JQA, some by the author but mostly by both “If the little girls had a good a time at the circus as their grandfather evidently had, the outing was a rousing success, the book lets us go inside the head of a man who rarely showed this side in public”. I especially enjoyed the recipe for lemonade “add to a gallon of water a bottle of Jamaica rum, a bottle of cognac, a bottle of champagne, and a pound of sugar. As a minor detail, the recipe suggested including a pint of lemon juice.”
“John Quincy Adams” is an amazing book about one of American’s most fascinating people. The book is full of information, told in a readable narrative, chronological style which is easy to follow but because it’s so dense, a slow read but an interesting one.

The book is divided into five parts:

Facing Expectations (1767- 1794) introduces the reader to the young JQA traveling Europe with his ambassador father. Upon returning to America to continue his law studies at Harvard, JQA falls in and out of love and opens a fledgling law practice in Boston. His real breakthrough comes through his essays in which his understanding in international law shines through and puts him on the short list to be an ambassador to the Netherlands representing President Washington.

And thus a promising diplomatic career has been started.

Discouraging Choices (1794 -1805) touches about how JQA met, feel in love and married Louisa Catherine Johnson while being an minister plenipotentiary to the Prussian Empire in Berlin (his Netherlands appointment being changed). When Thomas Jefferson took office, JQA was called back to the United States, to his chagrin. The life of a diplomat suited JQA because it left a lot of time for other pursuits and studies. While in Boston, his law practice did not succeed, and he hated every moment in the office. Even though he promised not to run for office, he finally did and ended up a US Senator while trying hard to maintain his independence from the party.

Cautious Hopes (1805 – 1817) which covers the time of JQA’s appointment as minister to Russia. In Russia JQA became friends with Tsar Alexander and the Tsarina, due to his wife accompanying him and the little girl (the short lived Little Louisa) born at the time which helped immensely due to JQA’s lack of charm.

JQA did get the Tsar to be favorable towards the new United States as well as reporting Napoleon’s attack in 1812 and defeat in 1814. JQA was recalled by President Madison to London to server as chief negotiator of the U.S. commission for the Treaty of Ghent, which ended the War of 1812 between the United States and Great Britain. Soon after he was appointed ambassador to Great Britain from 1815 until 1817(a post held by his father years before).

President Madison appointed JQA to the office of Secretary of State.

Faltering Ideals (1817-1829) After being Secretary of State for Madison & James Monroe (where JQA was an influential advisor on the Monroe Doctrine), JQA beat Andrew Jackson to be President. Never admitting he wanted the job, JQA’s tenure suffered under an assault of his opponents and the book only dedicates one chapter to the four years. JQA could not stay out of public service and, in a move rarely seen to this day, went back to Washington to serve the people as Congressman.

Astonishing Results (1829 – 1848) A tough time for JQA who also lost his sons George and John who battled with alcoholism. At that time it was expected of JQA to support their wives and children as well as his own.  However, as he is getting older, JQA becomes a hero, celebrated for the same things the politicians hated him – his individualism, independence and refusal to vote on party lines.

As much as JQA is celebrated in the North, the notoriety he brings upon himself in the South for his abolitionist views and his defense of the slaves on the ship “Amistad” make him a household name until his death.

Zohar – Man of La Book
Dis­claimer: I got this book from the local library
*Ama­zon links point to an affil­i­ate account, the money is usually spent on books