About:
Israeli Governments Throughout the Generations: Wise Decisions and Dumb Decisions by Dan Korn and Yechiel Gutman is a non-fiction book which evaluates, in hindsight, some of the decisions made by the Israeli government. Mr. Korn is a university professor in Israel (his father was a member of the Israeli Knesset), Mr. Gutman is a lawyer who has assisted and advised Israeli ministers of Justice. 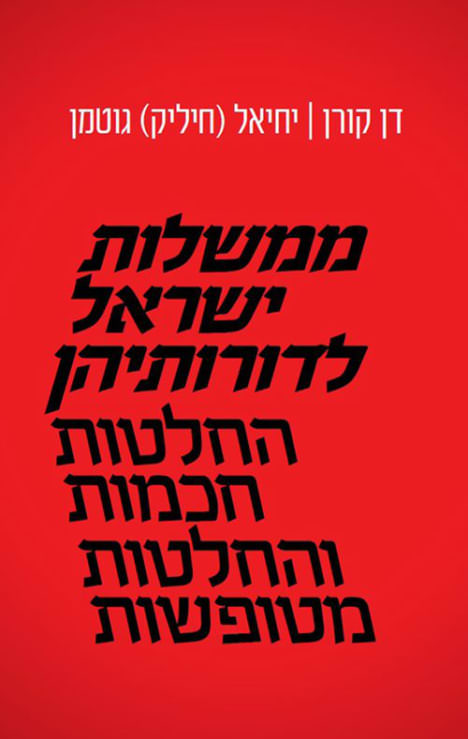 My rating for Israeli Governments Throughout the Generations – 4

Thoughts:
Books like Israeli Governments Throughout the Generations: Wise Decisions and Dumb Decisions ( ממשלות ישראל לדורותיהן – החלטות חכמות והחלטות מטופשות) by Dan Korn and Yechiel Gutman are some of my favorite reads because they are supposed to either enhance, or completely tear apart, everything you learned in school. Analyzing government decisions, especially after such a relatively short time, is certainly a difficult task and often time unfair. These decisions are much more complicated and often don’t fall into a “smart” or “stupid” category but it’s always interesting to read about the train of thought leaders have.

From researching and studying a bit about the history of Israel in the past, I could not let go of the notion that the authors chose a good story instead of sticking with history. Like any country, Israel has its legends which are based on actual history. That’s somewhat OK when teaching history in grammar schools (the old “I cannot tell a lie” lie) because the goal of history class is to make good citizens, not necessarily accuracy. But when it comes to books like this, distinguishing between fact and fiction is essential.

I would like to read another book discussing decisions which were on the table, but were not made. What I did find strange in the book is that the decisions which the authors consider as “failures” are seen as distant, even though they were relativly recent (1980s), and other “failures” are the quintessential Israeli when taking in with historical perspective (for example, the decision to bring the bones of Ze’ev Jabotinsky to be buried in Israel).

I did enjoy the book very much though. There are some points which I would have changed for accuracy purposes, but I enjoyed to read the analysis of two smart guys, bringing up points I did not think about and events I never knew.