is the first novel I read by author Ace Atkins and after this I intend to read more. The subject of this historical fiction book is the kidnapping of oil magnate Charles Urschel by George “Machine Gun” Kelly and his wife Kathryn. 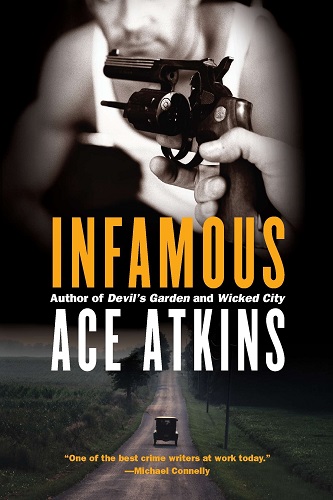 My rating for Infamous – 4
Buy Infamous from Amazon.com*
More Books by Ace Atkins*

is the first novel I read by author Ace Atkins and after this I intend to read more. The subject of this historical fiction book is the kidnapping of oil magnate Charles Urschel by George “Machine Gun” Kelly and his wife Kathryn.
The year is 1933, George Kelly is “just” another bank robber until he gets involved, with some prodding from Kathryn, in the kidnapping of Mr. Urschel. The act of kidnapping itself was a comedy of errors, the kidnappers ran out of gas, got lost, couldn’t find the safe house, etc. – and it’s all true.
Mr. Atkins breaths life into these characters, George is not the hard nosed gangster we all thought he was, but a big lug who likes the Sunday funnies and Buck Rogers. Kathryn Kelly is using George to live the lifestyle she always wanted, pushing him to do things he doesn’t necessarily want to do, feel comfortable or doesn’t dare. The novel makes it pretty clear that George Kelly, who is more interested in being shaped dressed than famous, would not be the legend he is today without his pushy, seductive and manipulative wife.  Kathryn even made sure George had a nickname (“machine gun”) like every respectable gangster should.
Along with the Kellys we follow their pursuers, mainly FBI Special Agent Gus T. Jones, a tough “old school” man. Over the course of about two months Jones and his team of young agents follow every lead they have to the grand finale.
The cast of characters ranges from FBI agents (G Men), other gangsters and Mr. Urschel’s family. They are all well drawn, I suppose most of them were real people (if not all), and Mr. Atkins wonderfully plays off the contrast between the rich and the poor – pitting the rich oil barons against the criminal element of the bank robbers who have more honor among thieves than they would ever know.
Even though the ending of the story is not much of a climax Infamous is still a great read.
The story is told through the eyes of an invisible observer, a fly on the wall. We, the readers, do not hear what any of the characters think but we observe them from a close distance.The storytelling is riveting and exciting; the characters are interesting, engaging and dimensional. I don’t know if Mr. Atkins meant to make George Kelly a likable figure, but to me he was the most likeable person in this unique cast of characters.

If you were a gangster, what would be your nickname?