In Pursuit of Jefferson: Traveling through Europe with the Most Perplexing Founding Father by Derek Baxter is a memoir/travel/history book following the author and his family recreating Thomas Jefferson’s travels. Mr. Baxter is a family-man, a lawyer, a Virginia, and of course, a fan of Jefferson. 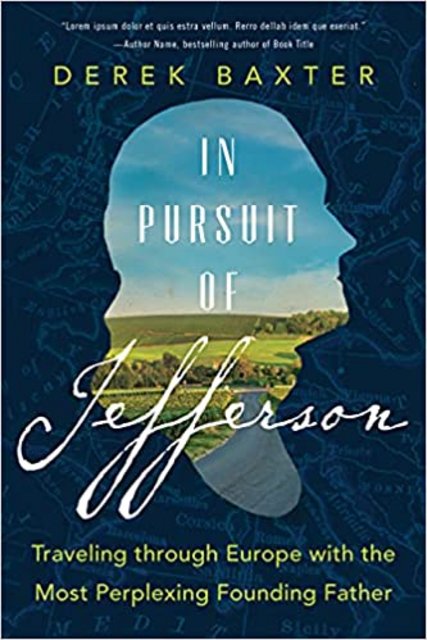 The concept of the books sounded, to me, very original and exciting. Mr. Baxter has read Jefferson’s Hints for Americans Traveling Through Europe and decided to follow his footsteps. I have read several books about Thomas Jefferson, and shamefully admit that the title didn’t sound familiar.

The author, his wife, and two children took a series of vacations, following Jefferson’s 1788 book through England, France, Germany, Holland, and Italy. These weren’t just sightseeing tours, the family visited vineyards, farms, as well many towns. Attempting to observer what the Founding Father saw, or experienced, whether it be architecture or “new” technology. On the way they learned about local cuisine, cheesemaking, and, of course, wines.

About half way through, the tone turned a bit somber. The Virginia native realized that Jefferson was a slave owner, and a hypocrite when it comes to that and other aspects as well. The American Founding Fathers, however, were well aware of their hypocrisy, and wrote about it often. It was either selective amnesia, or just a subject Virginia schools chose to gloss over.
Or simply, the old adage of “you don’t want to meet your heroes” turned out to be true.

To Mr. Baxter’s credit, he dives into the subject. He does not shy away from it and does his best to learn more about slavery, as well as Jefferson’s role in it. At first, I found the subject out of context for the book. However, trying to make sense of it, if possible, by a native Virginian was certainly an interesting read.

If I had to describe In Pursuit of Jefferson by Derek Baxter in one word, it would be “honest”. Mr. Baxter writes in a chatty tone, warm, and often corny – but it works.

Buy In Pursuit of Jefferson from Amazon.com*
More Books by Derek Baxter*

In Pursuit of Jefferson: Traveling through Europe with the Most Perplexing Founding Father by Derek Baxter