About:
Hook’s Tale: Being the Account of an Unjustly Villainized Pirate Written by Himself by John Pielmeier is a reimagining of the famous play Peter Pan, this time from the point of view of Captain Hook. Mr. Pielmeier is an award winning playwright and screenwriter. 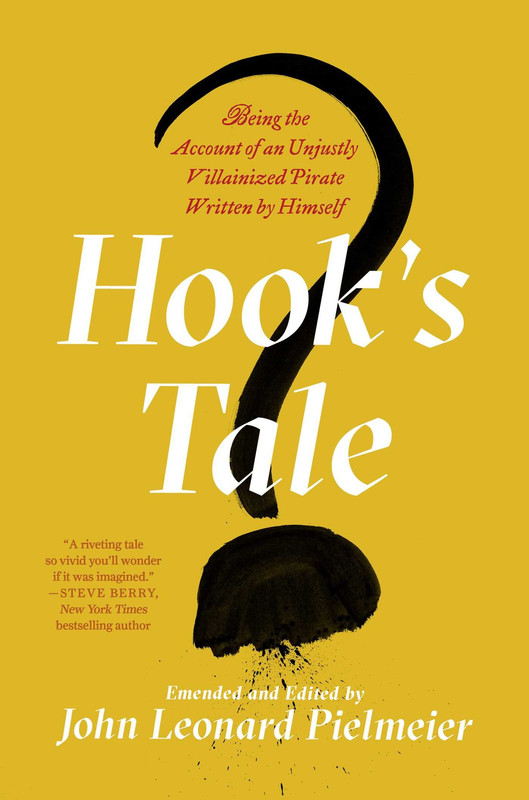 Thoughts:
The Captain Hook we all think about in our heads is the one from the Disney movie, even recent adaptations have the trademark Hook features which Disney ingrained in our collective memories.

To be fair, the Disney adaptation is not far off the mark and Dustin Hoffman’s Hook in the 2003 movie is spot on, as if right out of J.M. Barrie’s play.

I always thought of Captain Hook as the allegory for the quintessential English father. A humorless disciplinarian, whose word is the law in his castle, who thrives on punishments and gets riled up at the smallest infraction from his family.
The character I always equated with Captain Hook, in my childish mind, was Mr. Banks, the patriarch of the Banks family from the popular books by P. L. Travers and movie by Disney who hires a magical nanny by the name of Mary Poppins.
I know only two English fathers, both living in the US and both are great fathers.

The two characters are in a similar profession (Mr. Banks “robs” his kids of their savings, after all) but unlike Captain Hook, Mr. Banks sees redemption at the end of his story. I say “his story” because Mary Poppins is, after all, the story of Mr. Banks, a realist in a world of dreamers. Captain Hook is also a realist, living in a world which is ready for the plunging, only to be stopped by a mischievous boy who never grows up.

In his book Hook’s Tale: Being the Account of an Unjustly Villainized Pirate Written by Himself, John Pielmeier takes it upon himself to turn the Barrie’s tale upside down. After all, not all antagonists are evil, not all protagonists are champions, and we are all the heroes in our own stories.

Unlike Mr. Banks, Captain Hook starts out as an optimist, a man whose world is at his feet for the taking through hard-work, perseverance and integrity. Hook is a man of integrity and fierce loyalty – how exactly did he become the stone cold, hardened pirate of legends is what this book is about.

To enjoy this book, it’s good to be familiar with the character of Hook from the original play. Mr. Pielmeier took the character, from the play not the movie, and expended on him. A highly educated man, poor but from a prominent sea-fairing family (To reveal who he really was would even at this date set the country in a blaze”) and a scalawag of the seas. Even pirates are afraid of Captain Hook.

I enjoyed the style of writing very much, long winded, wordy but with a certain charm and rhythm that works. Much like the books of old which were meant to be read aloud, to an audience, and not to oneself in privacy. The language tells a story which is rich and clever, takes advantage of things the audience knows, expands on them or turns them on their heads.
You never know.

Synopsis:
The story begins as our protagonist is kidnapped into the naval service as a cabin boy. He soon discovers a treasure map, as all good pirate kids do, and manages to get his ship into the archipelago.

During his adventures, the boy manages to fall in love, learn to fly, grow a pet crocodile and befriend a forgetful boy that never ages named Peter.