Hollywood and Israel: A History by Tony Shaw and Giora Goodman accounts for the relationship of Tinseltown with the Jewish state. Mr. Shaw is a professor of contemporary history at the University of Hertfordshire. Mr. Goodman is the chair of the Department of Multidisciplinary Studies at Kinneret College on the Sea of Galilee. 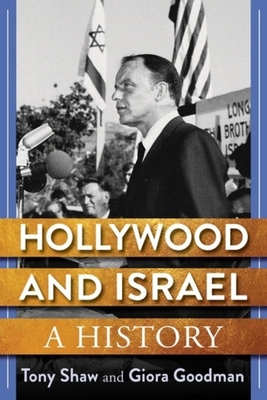 This book is well researched, as well as informative and entertaining. Ideology aside, the authors were mostly concerned with recording history. There is a noticeable attempt to be as fair-minded as possible.

I think most can agree that history is nuanced, Hollywood and Israel: A History by Tony Shaw and Giora Goodman takes great effort to drive that point home. The authors, however, don’t spend much time on trivialities, but try to keep the reader informed about politics interweaving with the entertainment industry.

The book does not shy away from flat out labeling many of the talked about movies as propaganda. Exodus, The Juggler, Salah Shabati, and Judith are prime examples of such lionization.

Palestine movies, or those that at least present a sober view point are also presented. Paradise Now, a Palestinian movie, for example, or Israeli series Fauda which attempts, and I believe succeeds, in presenting the no-win nuances of both sides of the conflict.

Along the way, the authors tell us of how the who’s who of Hollywood, then and now helped the young country. From obvious Jewish celebrities such as Barbara Streisand, Kirk Douglas, Billy Crystal, Elizabeth Taylor, and Sammy Davis Jr. to moguls such as Louis B. Mayer, David O. Selznick, and Samuel Goldwyn who have seen their role as contributing to the Jewish state after suffering the Nazi atrocities.

Other non-Jewish celebrities are also mentioned such as Arnold Schwarzenegger, Frank Sinatra, Robert DeNiro, Paul Newman, and Jane Fonda among many others. While, of course, there are the Israelis who “made it big” Lior Raz, Gal Gadot, Chaim Saban, Topol, and Arnon Milchin.

To counterpoint the narrative, Vanessa Redgrave, Casey Kasem and others also get several pages in this short book for the Palestinian narrative. While Israel managed to make, and keep friends in Hollywood, one can certainly argue that they are losing the war for public opinion in the on-line world.

Even though the entertainment industry supported Israel, they’re first and foremost a business and have been, since the beginning, put profits over ideology many times over and over again. I loved that the authors included You Don’t Mass with the Zohan which, not for nothing, does represent both Israelis and Palestinians in a light and positive manner

Hollywood and Israel: A History by Anthony Shaw and Giora Goodman