About:
Hitman Anders and the Meaning of It All by Jonas Jonasson is a fictional comedy by this Swedish author. Mr. Jonasson is a native Swede who worked as a journalist and owned his own media company. 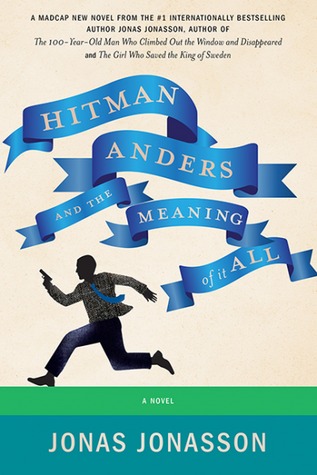 Thoughts:
I really enjoyed books by this author, especially The 100-Year-Old Who Climbed Out Through the Window and Disappeared, so when I saw Hitman Anders and the Meaning of It All by Jonas Jonasson, I knew there is a good chance I would like it as well. If you’ve ever read any works by Mr. Jonasson you’d know what to expect, a mad farce, with inconceivable luck and irreverent occurrences.

In this black comedy one has to completely wave their perception of reality and accept that this situations happen and read them as they were written, with a wink and nod toward social criticism. I am not the deepest person, nor am I Swedish or understand anything about Swedish culture (that is the only language actually I tried to learn but could not because I was afraid I’d break my teeth) but I could not wave the flailing feeling that I missed much social criticism due to this lack of knowledge, which would have made the book even more enjoyable.

This is a fun book, a great satire and a good read.

Synopsis:
Per Persson, a hotel receptionist and grandson to a multi-millionaire who lost all his money, meets an atheist female pries who was cast out of her congregation. Per and the priest hate people, but like one another… and they like money.

Hitman Andres is immoral and not too smart. Soon Per and the priest start a business selling Andres’ services out of the hotel, giving him a cut and booze. That is until Andre discovers G-d and decides to turn the page and giveaway all his money to the needy.

Buy Hitman Anders and the Meaning of It All from Amazon.com*
More Books by Jonas Jonasson