Hero of the Empire: The Boer War, a Daring Escape, and the Making of Winston Churchill by Candice Millard is a mini biography of the person who will become England’s most prominent and famous Prime Minister. The book follows the time Winston Churchill was a soldier, journalist and an amateur, struggling politician. 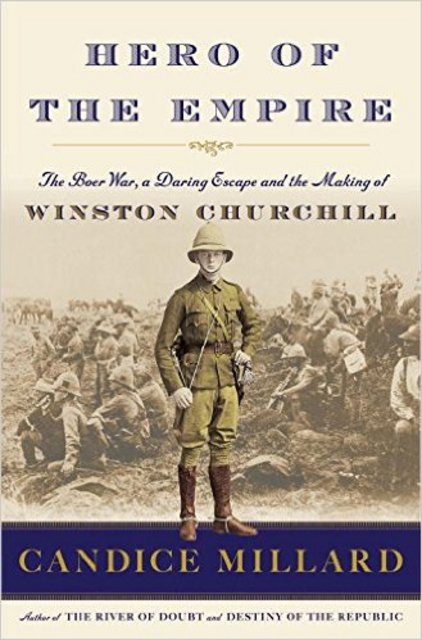 Two of the best books I read a few years ago were The River of Doubt and Destiny of the Republic so when I saw Hero of the Empire: The Boer War, a Daring Escape, and the Making of Winston Churchill by Candice Millard I immediately asked for a review copy and was very happy to receive one.

The story, told in style and grace, features a young, conceited Winston Churchill on his way to cover the Boer Wars in South Africa, 1889. Churchill is an arrogant man coming from an arrogant society. It is unthinkable that the British would lose, or even have a difficult victory, fighting the Boers.

The Boers, led by farmer Louis Botha, fought a guerrilla style warfare, taking the British by surprise. Two weeks after arriving, Churchill is taken prisoner but manages to escape. After traversing hundreds of miles by himself, he manages to get rescued. Appropriately enough, he finds his way back into the war, this time as an enlisted soldier and rescues his fellow prisoners.

The lessons young Churchill learned during these times will shape the 20th Century, but this book doesn’t dwell on them. Ms. Millard tells a story full of adventure and heroism. Churchill’s escape help rally the British forces (he was the son of a famous diplomat and a member of the aristocracy) and fight off the enemy.

Buy Hero of the Empire from Amazon.com*
More Books by Can­dice Millard