About:
Grunt: The Curious Science of Humans at War by Mary Roach is a nonfiction book which tackles subjects that challenge soldiers’ daily life, but are rarely thought about (unless it’s you wearing the uniform).  Ms. Roach, an award winning author, is known for her books which combine science and journalism. 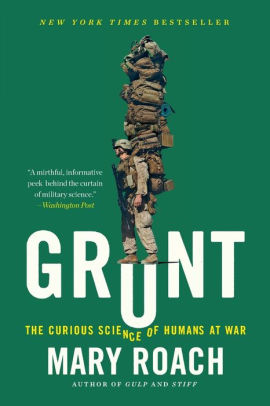 My rating for Grunt – 5
Buy Grunt from Amazon.com*
More Books by Mary Roach*

Thoughts:
Usually when I read about subjects of war, it is a somber book about combat, strategies, weapons, etc. Grunt: The Curious Science of Humans at War by Mary Roach does not talk about the struggles of combat, per say, but about the day-to-day issues soldiers have to deal with, namely cloth, armor, and health.

The book covers what it takes to keeping soldiers effective in the field. The author mostly concentrates on science and technology, but touches on policy as well. Actually, she is more amazed by the policy and how it has been implemented, but that’s a small part of the overall narrative. Some of the topics include cloth, sweat, diarrhea (while sounds disgusting, the disease is responsible for much death and the halting of armies), IED protection, treatment of genital mutilation, shark repellent, and a fascinating and enlightening section about sleep.

The book is written with dry wit, which helps with the subjects that not everyone might be familiar with, or uncomfortable subjects to some, such as IDE tests on cadavers.  While the author lets the experts talk about the science, she shows respect and warmth for the people she’s writing about.

This book is informative and interesting, it explains science in simple terms and keeps the reader engaged. The behind the scenes look at the not-so-thought-about issues (unless you are suffering from them) has much value and significance.