About:
Gray Day: My Undercover Mission to Expose America’s First Cyber Spy by Eric O’Neill is a non-fiction book following the author’s investigation into the FBI’s most damaging spy. Mr. O’Neill is a cybersecurity expert and a former FBI agent. 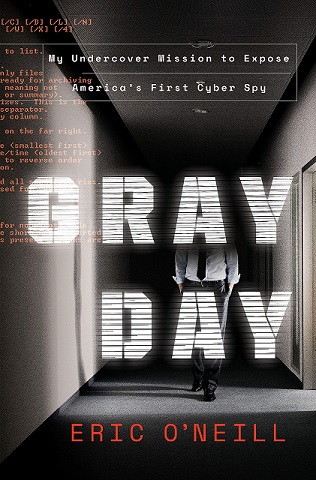 Thoughts:
I have read many books about cybersecurity, and many books which spy Robert Hanssen (code name: Gray Day) is mentioned, but I never realized the two subject had anything to do with one another, until now. Gray Day: My Undercover Mission to Expose America’s First Cyber Spy by Eric O’Neill is a thrilling memoir about the author’s FBI assignment to “work” for Hanssen while secretly investigating whether he is a Soviet spy or not.

The author starts by introducing the reader to his world of shadows. As an FBI “ghost” he was an expert at surveillance while blending into the background, gathering information without notice. Real spy work some might say.

The author got to know the spy very well, the worked close on the same projects and in close proximity. As the sole employee of the new department, Mr. O’Neill got the brunt of Hanssen’s wrath, demeaning mannerisms, insulting style of leadership.
Quite honestly, even if Hanssen wasn’t a spy it would be difficult to find people who’d want to work with him or for him.

The book goes beyond a spy vs. spy case. The author tells about the heavy price that individuals and families pay while one of the partners works a hectic, stressful job that requires lying to everyone (co-workers and family).

Mr. O’Neill wrote a very personal book, which reads like fiction but is a cautionary tale. He tells us what it’s really like working in intelligence in a cohesive, well written memoir. I just wonder what he couldn’t tell us?